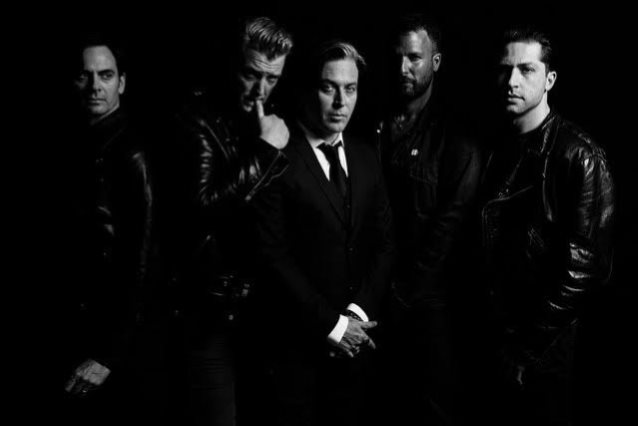 QUEENS OF THE STONE AGE Appearance On 'Ellen' Show Canceled

According to The Pulse Of Radio, QUEENS OF THE STONE AGE's appearance on Thursday's (December 14) edition of "Ellen" show was canceled abruptly, part of the ongoing fallout following an incident last weekend in which frontman Josh Homme kicked a female photographer in the face at a radio festival in Los Angeles. This is the second time this week that Homme or his band have been dropped from a TV spot: the BBC announced earlier that it was not going to air two pre-recorded segments Homme did for a children's show called "Bedtime Stories".

The QUEENS had been scheduled to appear on the "Ellen" show alongside Will Smith, but Smith was the only guest and the band was not mentioned.

As previously reported, Homme has already issued two apologies for the incident, which took place last Saturday night (December 9). In video footage, Homme can be seen walking across the stage past photographer Chelsea Lauren in the photo pit. He stops briefly, then issues a direct kick to her camera which sends it into her face.

While he said in his first response that he was "lost in performance" and hadn't noticed Lauren had been hurt when he kicked her camera, he posted a more extensive apology on video the next day, saying in part: "I don't have any excuse or reason to justify what I did. I was a total dick, and I'm truly sorry, and I hope you're okay."

Lauren was treated at a local ER after the concert and said she planned to file a police report.

QUEENS OF THE STONE AGE is off the road now but will begin the next leg of its North American tour in late January.