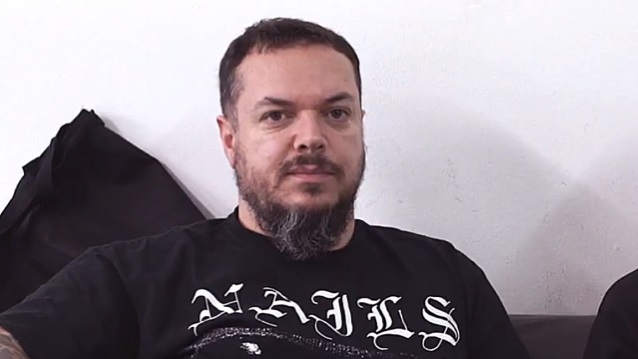 On December 3, Igor Cavalera (CAVALERA CONSPIRACY, SEPULTURA) was interviewed by Apes Metal at the Gasometer in Vienna, Austria. You can now watch the chat below.

Asked what advice he would give to young, up-and-coming artists who don't have a lot of money to record and promote their music, Igor said: "I don't know. A lot of things changed. For example, when we started, we didn't have a lot of money, and it was a lot more difficult to record — you needed to go to a professional studio, and that cost a lot of money, where nowadays I think it's a lot easier to record your demos. There's a lot of home studios [that] sound amazing. So, in that sense, I think things… I'm not saying it's easier, but it is a little more… I don't know… It's okay to do this [without going into a professional, expensive recording studio] whereas in those days, if you didn't have a proper demo, people wouldn't really listen to it. Like, most of our recordings, they were from a cassette, like in a boombox, and they were, like, demos — not really a professional album done that way. But I have to say it's the same thing. At the same time now, you have the Internet with a very easy access of people. If they hear the name of your band, they can just type [it into their phone or computer] and find something like either a video or a sound sample of it. So, I don't know… The fight is still the same. But at the same time, people are getting overexposed with way too much information on bands."

He continued: "I think it's really hard to find a recipe on how to make it, how to make your band [successful]. I think the best way to do it, it's simple again — it's, like, working super hard, and that's something that me and Max [Cavalera, Igor's former SEPULTURA and current CAVALERA CONSPIRACY bandmate] always did; we never [sat] down at home and just [waited] for things to happen. We've been on the road for more than 30 years. There's a lot of sacrifices there. So I think that's what I can tell young bands — it's a lot of work. You can't just expect people to… Even if your music is amazing, people are not gonna listen unless you're out there, you're pushing yourself, you're playing as much shows as you can and you're sending your… whatever. Back in the day, we would send tapes to fanzines. Nowadays you can send messages online and try to get your music across. So hard work is the name, I think, of the game."

According to Igor, however, it's all worth it in the end. "It is, when I look at it [from the point of view that] I can feed my kids, I can go on tour with my brother, I can do something that I love, it's worth it," he said. "Of course, there's a lot of sacrifices, there's a lot of missing birthdays from people at home [while] you're on tour, and there's nothing you can do. But I think at the end of the day, we do what we love, and that's important."

CAVALERA CONSPIRACY's latest album, "Psychosis", was released on November 17 via Napalm Records. The disc, which was produced by the Cavaleras' longtime friend Arthur Rizk, was recorded primarily at a studio in Phoenix, Arizona.

Igor and Max have spent the past year a half on the road as part of the the "Return To Roots" tour, during which they are celebrating the 20th anniversary of SEPULTURA's classic album "Roots" by performing the LP in its entirety.