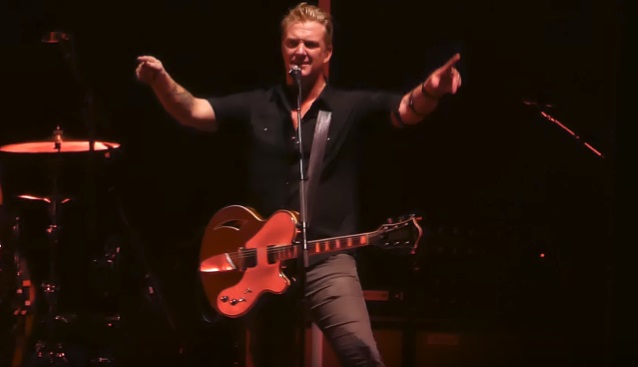 QUEENS OF THE STONE AGE Frontman Breaks Up Fight Mid-Show

According to The Pulse Of Radio, QUEENS OF THE STONE AGE singer/guitarist Josh Homme called out two audience members engaged in a fight during their October 24 concert at Madison Square Garden in New York City. Homme took to the mic to address them from the stage, saying: "What's going on? Is this something like a fight? We're not here to fight. If you want to fight, stick your head up your ass and fight for air — and get the fuck out."

Homme stepped away from the mic at one point and verbally engaged with the rowdy audience members.

Homme's speech was met with a hearty round of applause before the band kicked into "Domesticated Animals" from its new album "Villains".

The New York show closed out the band's recent North American tour, which was nearly all sold out. After a stint in Europe, the QUEENS will start a new North American run on January 22 in Victoria, British Columbia.

"Villains" debuted at No. 3 on the Billboard 200 album chart last month, moving 69,000 copies in pure album sales in its first week of release.