Festival producers Danny Wimmer Presents and AEG Presents are bringing a diverse and unprecedented music lineup to the eighth annual Monster Energy Carolina Rebellion at Rock City Campgrounds at Charlotte Motor Speedway in Charlotte, North Carolina on Friday, May 4, Saturday, May 5 and Sunday, May 6, 2018.

The Mid-Atlantic' s Biggest Rock Festival features over 60 bands performing on four stages, plus outstanding barbeque offerings in the Pig Out Village, and top-notch camping facilities.

The daily band lineup for Monster Energy Carolina Rebellion 2018 is as follows (subject to change):

Joe Litvag, executive producer of Monster Energy Carolina Rebellion, said: "In all of the Carolinas, there is only one music festival that has this kind of variety in a single weekend, spanning the rock spectrum and the decades of rock history. From MUSE, QUEENS OF THE STONE AGE and INCUBUS to FIVE FINGER DEATH PUNCH, GODSMACK, SHINEDOWN, HALESTORM and ALICE IN CHAINS, BREAKING BENJAMIN, STONE TEMPLE PILOTS… it doesn' t stop. And that is exactly what we wanted to accomplish for this year's Carolina Rebellion — non-stop, incredible rock from a diverse range of top artists."

Brent Smith of SHINEDOWN said: "We are extremely honored to be playing Carolina Rebellion 2018. We have always admired how this event has grown year after year. With that being said, let's get it on. Cya in May, Rebels!!!"

All General Admission and VIP tickets (including layaway options),as well as Hotel Packages and Camping options, are on sale now at CarolinaRebellion.com. Fans are encouraged to buy early and save. New for Monster Energy Carolina Rebellion 2018: Each ticket price level has a limited number of tickets available, so attendees can save more by buying earlier. Ticket prices will automatically move to the next price level once a price allotment sells out. The layaway purchase option also allows fans to split the ticket cost into four monthly payments.

Camping Packages are currently sold out. However, Camping Upgrades (to tent, basic RV or full RV camping) are still available for those that purchase GA or VIP weekend tickets.

Specially priced tickets for Monster Energy Carolina Rebellion will be available for active military through partner GovX while supplies last. 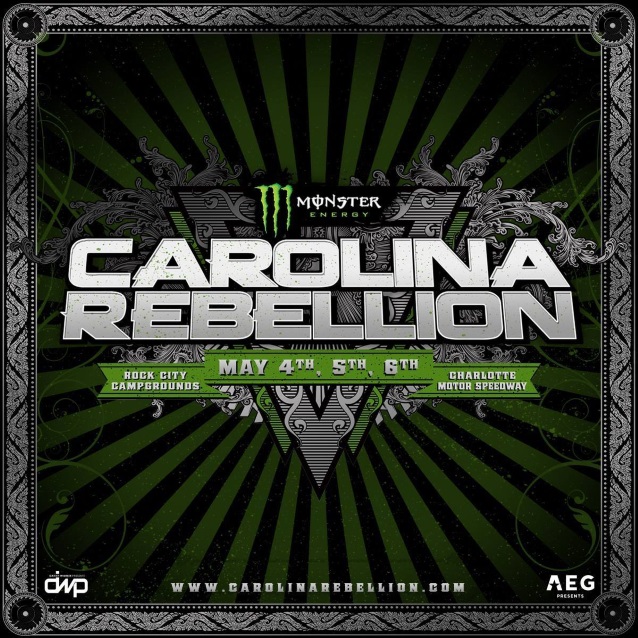