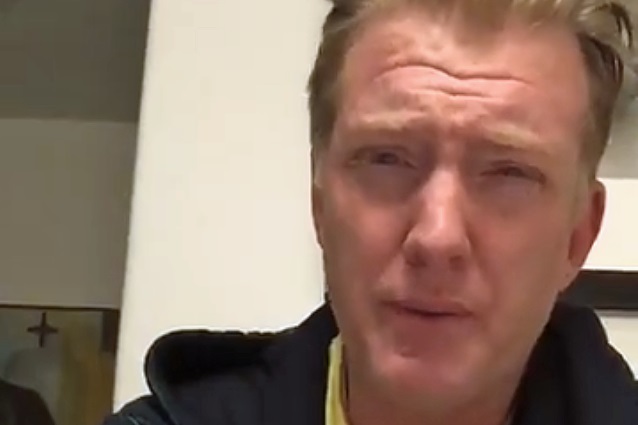 QUEENS OF THE STONE AGE frontman Josh Homme has admitted that he was "a total dick" for kicking a photographer in the face during his band's concert in Los Angeles over the weekend.

The incident happened Saturday night (December 9) on night one of the 28th annual KROQ Acoustic Christmas. Video footage of the QUEENS performance shows Homme playing the guitar and walking across the stage before he passes Chelsea Lauren, a photographer for Shutterstock, pauses briefly, then extends his leg directly into her camera before continuing to make his way to the other side of the stage.

Homme on Sunday released a video message apologizing to Lauren and saying that he was wrong for doing what he did.

"I've made a lot of mistakes in my life, and last night was definitely one of 'em. And I apologize for that to you.

"I wanna be a good man, but I think last night I definitely failed at that. And that means I failed my family and my friends as well. I don't want them to ever be ashamed or embarrassed about being around me or knowing me. And so I apologize also to my bandmates and my mom and my dad and my wife and my brother and my kids.

"Yeah, I'm gonna have to figure out some stuff, I think. 'Cause rock and roll is a wonderful thing. It's supposed to save and help people, not mess 'em up.

"So, Chelsea Lauren, I hope you're okay and I'm truly sorry. And I understand you have to do whatever you have to do. I just want you to know that I'm sorry."

Homme said in an earlier written statement that he was "lost in performance" while kicking lighting and music equipment on stage. He claimed that he hadn't noticed Lauren had been hurt when he kicked her camera, and insisted that he "did not mean for that to happen."

Lauren said that Homme also took out what appeared to be a knife and slashed his own forehead on purpose, leaving him dripping with blood for the rest of the performance. He is also alleged to have called the audience "retards."

Lauren has not yet publicly responded to Homme's apology, but she wrote on Instagram earlier that her neck was "sore," her eyebrow "bruised" and she said that she was "a bit nauseous."

"Assault in any form is not okay, no matter what the reasoning," she said. "Alcohol and drugs are no excuse. I was where I was allowed to be, I was not breaking any rules. I was simply trying to do my job.

"I hold nobody accountable for this but Josh himself.