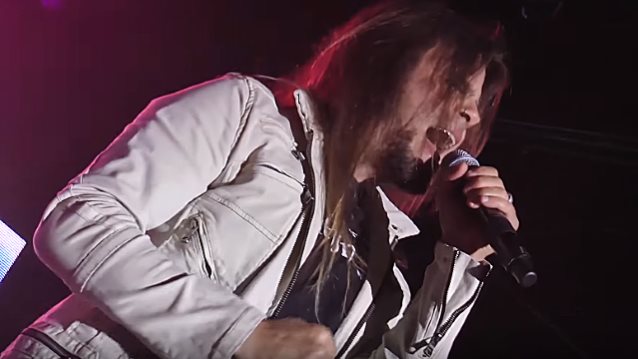 A gunman opened fire on October 1 from thirty-second floor the Mandalay Bay Resort and Casino in Las Vegas during the Route 91 Harvest festival, killing fifty-eight people and wounding five hundred others. The gunman, identified by police as Mesquite, Nevada resident Stephen Paddock, later killed himself.

QUEENSRŸCHE singer Todd La Torre addressed the massacre before the band's performance of its 1990 mega-hit "Silent Lucidity" at Sunset Station Outdoor Amphitheater. He told the crowd: "We just wanna take a very brief moment of silence to honor those people that were affected, directly and indirectly." Immediately afterward, he noted that this was "the first outdoor concert" in Las Vegas since last week's shooting. He added: "It's a crazy world that we live in, and it's scary and beautiful at the same time.

"Our hearts go out to this city and to every single person that was affected by that," he continued.

SKID ROW bassist Rachel Bolan thanked the audience for coming out and supporting live rock and roll following last week's incident. "I can't tell you how much that means to us and it means to our promoter and just everyone involved with this show," he said. "We're so proud to have you guys here. So thank you from the bottom of my heart, and I mean this absolutely one hundred percent. Thank you guys so much. We love you guys. And this is a night we will never fucking forget."

A few days prior to the Henderson concert, La Torre admitted to Tampa, Florida's WFLA-TV that there was a slight hesitation about performing so soon and so close to the venue where Paddock opened fire. He said: "The positive side to going into a show like that on Saturday is you know that this was an isolated incident, whereas this is just some wacko guy that decides to do something like this."

The singer added that incidents like the Las Vegas concert massacre heighten the sense of vulnerability that he and other artists feel when performing in public.

"There are those times where you wonder, like, am I gonna die today?" he said. "Am I gonna get shot at on stage?"

QUEENSRŸCHE is scheduled to enter the studio this fall to begin recording its next album for an early 2018 release.