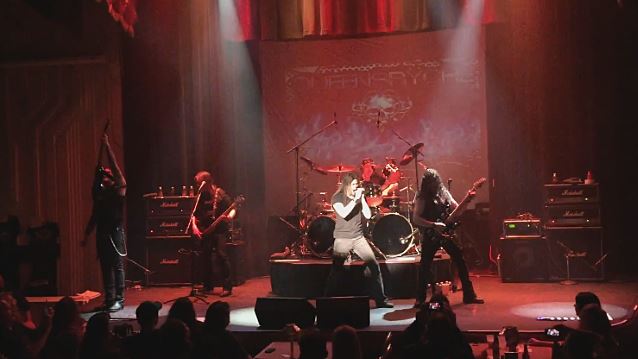 Fan-filmed video footage of QUEENSRŸCHE's March 21 performance at Cactus Petes Resort Casino in Jackpot, Nevada can be seen below.

As previously reported, QUEENSRŸCHE has tapped Chris "Zeuss" Harris (pictured below; ROB ZOMBIE, HATEBREED, SOULFLY, SHADOWS FALL) to produce the band's new album, due later in the year via Century Media. The CD is being recorded at Uberbeatz Studio in Washington.

In an interview with Metal Nation Radio, QUEENSRŸCHE singer Todd La Torre spoke about what fans can expect to hear on the band's follow-up to 2013's self-titled album. He said: "When you've got five guys that, everyone has different musical backgrounds… I mean, we all have a common likeness for a style and sound… But, you know, I'm always pushing for… It's a fine line, because I'm always pushing for heavy. And it has to be QUEENSRŸCHE; it can't be over-the-top heaviness… I don't wanna change the dynamic. Nobody in the band wants to change the real core sound and dynamic and style of the band. With that being said, QUEENSRŸCHE's never been afraid to try new things."

La Torre added: "The songs that we have right now are, I would say, melodic. There are some heavy tunes on there that are just, like, really rocking. I mean, some of the songs remind me, again, of 'Rage For Order', '[Operation:] Mindcrime'… We'll probably slip in something that's got a commercial… Not that we're trying to… Something with a more commercial appeal, like the song 'In This Light' did on the record that I did before. But, overall, I'm hopeful that, when it's all said and done, this record will have a really good drive, great, melodic choruses, great guitar parts, very dynamic... A little more prog… There's a little more proggy elements…

"When you've got two years [between albums], you don't want [people] to say, 'Wow, that's the best they could come up with?' You never want that. You always want, 'Hell yeah! This is another great QUEENSRŸCHE record.' And that's all that you can really hope for. But it's definitely going to have, again, what I consider all of the elements that the true QUEENSRŸCHE fans will enjoy: great drumming, solid foundation, bass driven, great guitar work and harmony things… Vocally, there's some things where I get into the upper register pretty good.

"I always wanna keep that metal… [Laughs] Sometimes I think [the other guys in the band] get sick of hearing me saying that. I'm, like, 'I wanna melt their fucking faces off.' [Laughs] But I have to do what the music calls for. And, overall, it's been a great process. It's always a learning experience.

"I'm finding, as a songwriter, what my stylistic things are, musically. I love ALICE IN CHAINS harmonies; they always had these interesting harmonies in their music. And I always find myself, when I'm writing and I'm recording, doing new things, I kind of lean on those types of harmonies. So I'm finding out things about myself as a writer that I didn't know before. And so it's a lot of fun."