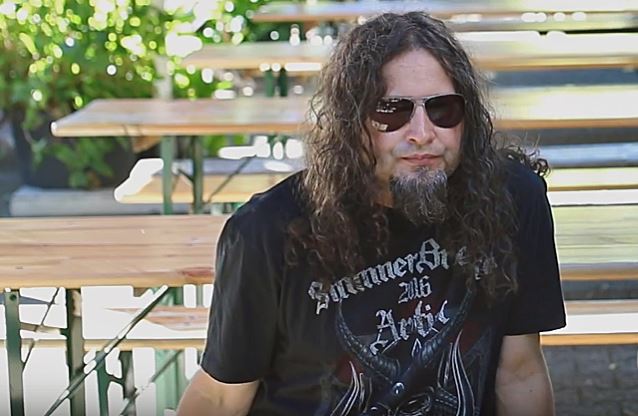 Toby of Metal-Heads.de conducted an interview with QUEENSRŸCHE guitarist Michael Wilton on August 19 at the Summer Breeze festival in Dinkelsbuhl, Germany. You can now watch the chat below. A couple of excerpts follow (transcribed by BLABBERMOUTH.NET).

On the importance of using social media to promote your band in 2016:

Wilton: "Well, you know, it's kind of… You've gotta move with the changes in time, right? My kids are pushing me: 'Dad, you've gotta get on Facebook and you've gotta tweet more. And you've gotta Instagram.' It's a full-time job trying to do that. But we know the importance of it, 'cause back when we were in the '80s, there were [print] magazines — there were rock, metal magazines — and that's how everybody got their information. And now it's all over the web. So now you have to… You know, to stay current, you've gotta post. Otherwise, you'll be forgotten."

On the increased emphasis on touring in order for bands to survive:

Wilton: "Look, every band in the world is touring right now, you know; that's how we're making our existence still happen. Because you don't have the cushion of album sales anymore to sustain the lifestyle, so it's all about touring. And with that, it's a big traffic jam. So it's very important that you have good people supporting you, booking your shows and making sure you're playing in the right places. I mean, let's face it, last night, there was probably a lot of repeat customers just because they saw us the year before. So that's what we wanna see. For me, it's great. I get to look out in the audience and I see people more my age that have been there since the EP, but I'm seeing lots of young people, curious, checking us out, rocking out, and that's what it's all about. We're kind of, I guess, in a rebirth stage, right? Since Todd's [La Torre, vocals] been in the band, we have a pocket of fans that just know us with Todd and don't know the old QUEENSRŸCHE. So it's kind of a good situation to be in, I guess."

On whether the period between 2012 and 2014 when QUEENSRŸCHE was embroiled in a legal battle with its former singer, Geoff Tate, was the "hardest path" he has had to take as a musician so far:

Wilton: "I think it's any person's hardest path. It's not easy when the business is failing and bad decisions are being made, and you have to, basically, rebuild what you have left. And to do that… It's been a few years, and we're still doing that — we're still repairing all the damage, basically… speaking, you know, in a business way. But in a creative way, we have the band back again. We have the chemistry, the band's on fire live, and we're writing great music again, so that's all happening. It's, like, a band has its ups and downs, and when it's in its down, it's the hardest to get back up. And that's a hard task for any band."