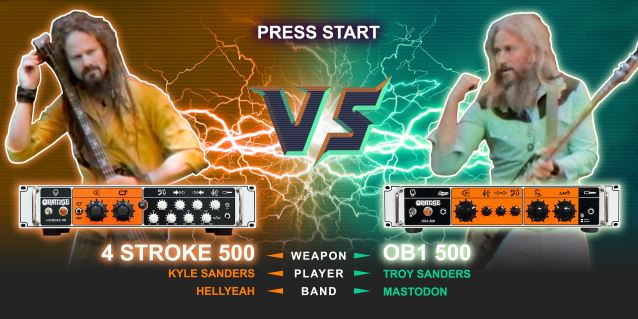 Years after losing to his brother, Kyle, in the final of the 2016 Orange Amplifier Classic competition, Troy is now a broken man. Sitting on a squalid sofa, he binges on junk food watching himself play at the height of his career. As he gorges himself, he flicks to a replay of the battle that began his terrifying slide into obscurity. The video documents a nail-biting fight to determine who is the best bassist, a true clash of bass titans.

Troy and Kyle are aided and abetted by an array of Orange bass gear. Kyle opens the battle using two 4 Stroke 500's through an OBC810 Cab. Troy fights back with his double OB1-500 amps through a OBC115 and OBC410H full stack.

See the tragic story that led to his downfall below.

The 4 Stroke is a class AB solid state amp with all analogue circuitry. It features a full-tone stack which allows for an unparalleled level of control over EQ.

The key to the OB1's unique sound is Orange's footswitchable blend circuit which adds a veneer of controllable gain and increases harmonic content at the upper register of the input signal.

To find out more about the gear they use, go to OrangeAmps.com.