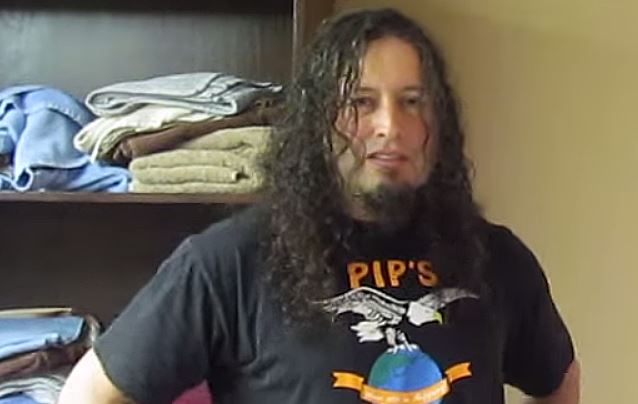 QUEENSRŸCHE's MICHAEL WILTON On Next Album: 'There's Some Serious Depth To This Record'

On May 22, Jay Nanda of San Antonio Metal Music Examiner and AXS.com conducted an interview with QUEENSRŸCHE guitarist Michael Wilton in San Antonio, Texas. You can now watch the chat below.

Speaking about the progress of the recording sessions for the follow-up to QUEENSRŸCHE's 2013 self-titled album, Wilton said: "Actually, we just finished recording all the music, and right now it's being mixed and mastered, and then it will be delivered to our record label, Century Media Records. And we're look at an end-of-September [or] early-October release."

He continued: "I can't tell you the name [of the album] yet, 'cause we're… not ready to tell you the name yet. [Laughs] But it's really been a great endeavor. We've actually had more time to grow with all the great talent in the band. And everybody's really united and the music is really encompassing probably the first five QUEENSRŸCHE records and evolving naturally, like QUEENSRŸCHE does on each album. And I can hardly wait for everybody to hear this, 'cause it's really varied and there's some serious depth to this record."

Wilton also talked about QUEENSRŸCHE's attempt to raise $2 million by selling stakes in what the band's securities attorney called a "new holding company for all things QUEENSRŸCHE" that will receive the revenues from its tours, merchandising, album sales and digital downloads.

"There's two phases," Wilton explained. "We did a PledgeMusic account, where we… These days, basically, you don't get huge advances from the record companies anymore, so bands who are doing this are doing special offerings on PledgeMusic and bringing the fans into the investment — like pre-buying the CDs, buying a guitar, buying a drum set, some time spent with the band, and all these things. And then we took it up to [another] level where we actually have… 'Cause we are are a business, and businesses sell shares to make the company bigger. So it's kind of an equity raise that we did centered around the [provision of the 2013] JOBS Act [that allows promoters to publicize a private stock placement, though only 'accredited investors' are eligible to invest] that was brought into the Congress a few years ago. And it's just… For small businesses, I guess, they can do this. Anybody can do this; you just have to have a corporation, which we happen to have. So, yeah, we're offering a small percentage of it to raise capital to build… to bring QUEENSRŸCHE back to the day of big, huge performances, with visuals and lots more video and videos. That's kind of what you need these days, right?! 'Cause the CD sales aren't as huge as they used to be. So it's a creative way for bands to do things. And if you have a corporation, you can always offer a little bit. And we've got a few people that have done that, and now they're members of the QUEENSRŸCHE machine and get to endure a lot of fun. It's just a business thing. It's non-musical. It's just hardcore business."

"Queensrÿche" sold around 13,500 copies in the United States in its first week of release to land at position No. 23 on The Billboard 200 chart. The record arrived in stores on June 25, 2013 via Century Media Records.