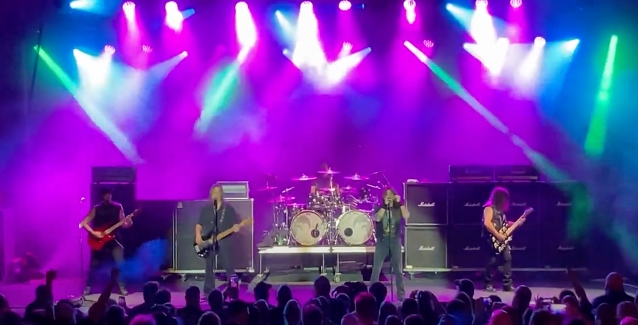 After the show, La Torre posted a photo of him sporting the shirt, and he included the following message: "Proudly wearing my legit 1989 METAL CHURCH tour shirt, with a special dedication to our dear friend Mike Howe. You were there in spirit".

When Howe's death was first announced, La Torre took to his social media to write: "No words to say on this one. Just conversed with him less than a week ago. My heart hurts for this profound loss. A true legend, kind soul, and a personal friend."

Back in 2017, METAL CHURCH released a new studio version of the song "Fake Healer" that featured a duet with La Torre. When the track was first made available, La Torre said: "Having been a fan of METAL CHURCH since my early teens, never in my wildest dreams would I have ever imagined that the great Mike Howe would rejoin the band! Getting the opportunity to record a duet to the track 'Fake Healer' was beyond amazing!"

Howe was found dead at his home in Eureka, California on Monday, July 26. According to TMZ, Howe's official cause of death was determined to be asphyxia due to hanging. A spokesperson for the Humboldt County Sheriff's Dept. told the site authorities are calling it a suicide.

TMZ stated that cops in Eureka got a call just after 10 a.m. on Monday reporting an unexpected death at a home. By the time deputies arrived, they found the 55-year-old dead at the scene.

Great show tonight in Iowa. Thank you to all that attended, you were an excellent audience 👍

No words to say on this one. Just conversed with him less than a week ago. My heart hurts for this profound loss. A true legend, kind soul, and a personal friend.