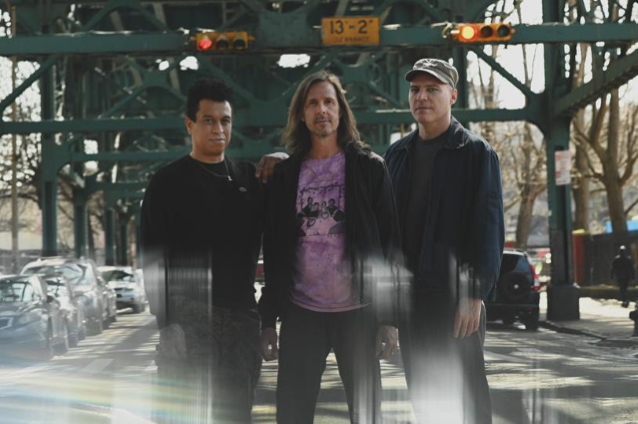 QUICKSAND Releases New Single 'Giving The Past Away'

New York City post-hardcore band QUICKSAND has released a mesmerizing new single, "Giving The Past Away", ahead of a tour with CLUTCH and HELMET, in support of their 2021 album "Distant Populations". A continuation of the critically acclaimed album, the track is driven by a thunderous bassline and growling guitar riff for a raw rock and roll swagger.

"The working title for this song was 'Greatest Quicksand Song Ever' so you can imagine it was a very tough call leaving this song off 'Distant Populations'," the band comments. "The only reason we could agree on to leave it off was that we wanted to have some really strong material in reserve for later in the year. Ultimately the title came from the most prominent line in the song which is an embrace of the present which is very in line with our thinking with 'Distant Populations'. We're super proud of this one and are very psyched to share it with the world."

Recorded at Studio 4 Recording in Conshohocken, Pennsylvania, "Distant Populations" was produced and engineered by Will Yip (THE MENZINGERS, CODE ORANGE, DEFEATER) and mixed by Josh Wilbur (LAMB OF GOD, MEGADETH, AVENGED SEVENFOLD). The album is the follow-up to the critically lauded 2017 release "Interiors". Sonically it has a punchier, more up-tempo sound than its predecessor, with its 11 songs being concise, carved sonic jewels boasting not a single wasted note. Its gripping lyricism and raw power leap out from the very first listening.

Formed in 1990, QUICKSAND made its full-length debut with "Slip" — a 1993 release praised by The A.V. Club as "a nearly flawless record that combines the irony and heaviness of HELMET with FUGAZI's penchant to dismantle sound in the most energetic ways." Arriving in 1995, their sophomore album "Manic Compression" appeared at No. 1 on the Top Five Best Post-Hardcore Records list from LA Weekly (who noted that "if there were any justice in the world, QUICKSAND would have been the biggest underground band of the '90s").

Throughout the early '90s, QUICKSAND toured with bands like HELMET, FUGAZI, RAGE AGAINST THE MACHINE and ANTHRAX. After disbanding in late 1995, they reunited for a one-night performance in June 2012. They've since appeared at festivals like FYF Fest and Pukkelpop, and in 2013 embarked on their first North American tour in 15 years. In 2017, the band released their long-awaited third-studio album "Interiors" which saw Consequence Of Sound praise the band for their sound "that nobody else has been able to replicate in all the time they've been gone."

QUICKSAND is frontman/guitarist Walter Schreifels, bassist Sergio Vega and drummer Alan Cage. They will be heading out on a North American tour with HELMET and CLUTCH starting September 13 in Toronto and ending October 23rd in New York.