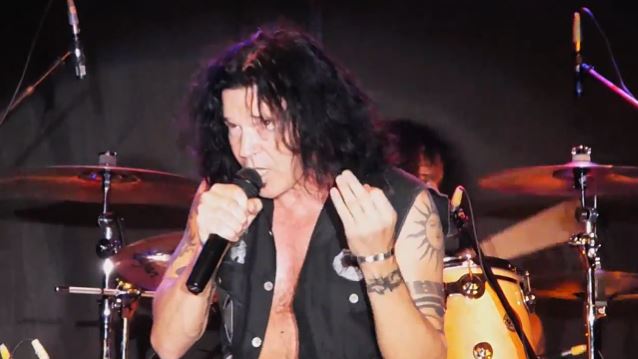 Fan-filmed video footage of QUIET RIOT's August 2 performance at the Yamhill County Fair in McMinnville, Oregon can be seen below.

"There is the misconception that Jizzy is the fourth [QUIET RIOT] singer [since the band reformed in 2010]," Banali said. "He's actually the third. We hired Mark Huff and let him go and I asked my friend and former MONTROSE singer Keith St. John to fill in for three shows that we had on the books. That hardly qualifies him as a singer for QUIET RIOT. We then hired Scott Vokoun and subsequently also let him go. That's where the real story begins when we asked Jizzy Pearl to come on board. After giving to unknowns the opportunity, we went with a pro. Jizzy is the real deal."

He continued: "I am very conscious of Kevin's [DuBrow, late QUIET RIOT singer] legacy and the legacy of QUIET RIOT as I continue this journey. You can never replace a singer or performer like the late, great Kevin DuBrow who was the total rock and roll package. He was also my best and closest friend, so that plays into it as well. To me it has to sound like QUIET RIOT, though not exactly as it was with Kevin, but it still has to have that 'sound' and energy. Jizzy is doing a fantastic job of keeping the spirit, music and sound of Kevin's vocals while bringing his own sound to the band which blends really well."

"The six new studios songs were co-written by me and songwriter, guitarist, vocalist Paul Sabu," Banali explained. "Paul and I did a recording project together a few years back and we wrote and worked well together for that. I wanted songs that brought some of the spirit of QUIET RIOT to the here and now. Paul and I made demos of the six songs and then I gave them to the band to learn and add their own DNA to them. Then we went into the studio to record the master tracks. I produced the record and the tracks were recorded and mixed by Grammy Award-winning engineer Neil Citron, who is also a close friend."

He added: "Jizzy has done a phenomenal job singing these songs and bringing the spirit of Kevin's vocal style while not losing his own vocal identity. Guitarist Alex Grossi did a fantastic job recording the guitars, as did Chuck Wright, who played bass on two of the tracks. I also invited my dear friend and historic QUIET RIOT bassist Rudy Sarzo to play on two tracks and another great friend Tony Franklin to play bass on two tracks. Tony has QUIET RIOT history as he was the bass player on the 'Rehab' record, which was our last record with Kevin."

DuBrow died in November 2007 of an accidental cocaine overdose. He was 52 years old.