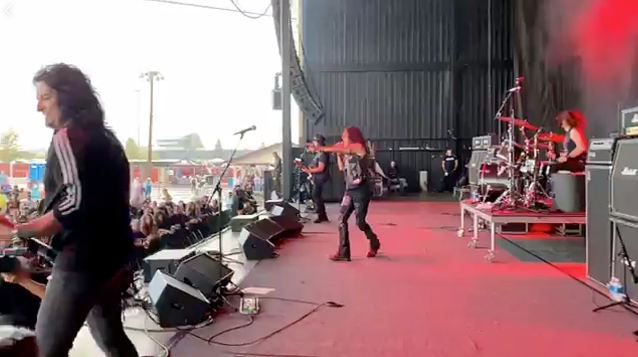 QUIET RIOT played its first show with returning vocalist Jizzy Pearl on Saturday, September 21 at the Grand Rocktember Music Festival at the Grand Casino Amphitheater in Hinckley, Minnesota. Fan-filmed video footage of the concert can be seen below (courtesy of Tyson P Leslie).

As has been the case with several shows this year, QUIET RIOT played the Hinckley gig without drummer Frankie Banali, meaning that the band performed without any of the members from its classic lineup: Banali, singer Kevin DuBrow, guitarist Carlos Cavazo and bassist Rudy Sarzo.

Earlier in the month, QUIET RIOT parted ways with singer James Durbin and replaced him with Pearl. Pearl previously fronted QUIET RIOT from 2013 until October 2016, when he was briefly replaced by Seann Nichols, who played only five shows with the group before the March 2017 arrival of "American Idol" finalist Durbin.

Durbin reportedly left QUIET RIOT "to concentrate his time and efforts on his solo career.‬"

He recorded two studio albums with QUIET RIOT — 2017's "Road Rage" and the upcoming "Hollywood Cowboys" — during his three-year stint with the group.