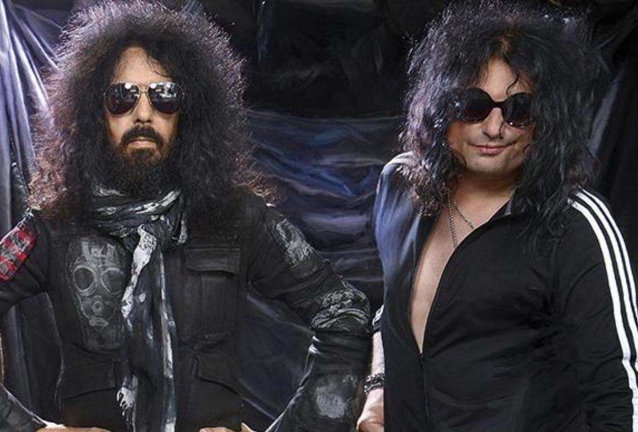 QUIET RIOT's Frankie Banali is "doing great" after completing his 21st round of chemotherapy, says his bandmate Alex Grossi.

The drummer, who has been battling stage IV pancreatic cancer for the past 15 months, went public with his diagnosis last October, writing in a social media post that the cancer treatment had forced him to miss several live shows with the band.

Grossi discussed Banali's health status during a recent interview with Combat Radio. The guitarist said (see video below): "[Frankie is] fighting the good fight with cancer. He did his 21st round of chemo yesterday. And he's hanging in there. He's actually doing great. He looks great. He's out fighting the good fight. We obviously haven't been playing [due to the coronavirus pandemic] — no one has — so I think, in a roundabout way, it's been kind of good 'cause he can really rest up and get a handle on this thing."

On June 10, Banali told SiriusXM's "Trunk Nation With Eddie Trunk" about his cancer battle: "I'm still doing the chemotherapy. I switched to a different chemotherapy a few months ago. And the side effects on this one are pretty brutal, and they pretty much last into the next round of chemo. So you kind of don't get a break for about three weeks, and then you get about maybe 10 days off, and then the cycle starts again. But it's part of what I'm doing."

At some of QUIET RIOT's shows last year, Banali was replaced by either Johnny Kelly (DANZIG, TYPE O NEGATIVE) or Mike Dupke (W.A.S.P.),depending on each musician's availability.

QUIET RIOT's shows with Kelly and Dupke marked the first time ever that the band performed without any of the members from its classic lineup: Banali, singer Kevin DuBrow, guitarist Carlos Cavazo and bassist Rudy Sarzo.