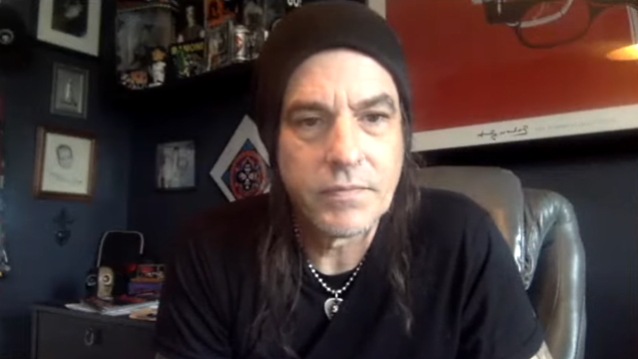 SKID ROW bassist Rachel Bolan has weighed in on bands who rely heavily on pre-recorded tracks during their live performances.

Speaking to The Rock Experience With Mike Brunn about some rock acts' reliance on pre-recorded tracks, Rachel said (as transcribed by BLABBERMOUTH.NET): "We don't use 'em — SKID ROW doesn't use 'em. We never have. We'd rather sing a bad note. That's just us.

"If a band goes out and they need it… You know there's not an orchestra playing while KISS is doing 'Beth'; there never has been," he continued. "In [QUEEN's] 'Bohemian Rhapsody', that whole symphonic part, they walk offstage. No one's ever had a problem with it. Bands that enhance with… You have certain drum tracks — you're not gonna bring out another drummer if it's a different beat to a song, or just different sounds and everything. Who cares, man? Obviously, you're not gonna load up another bus full of musicians to come out and play one song. 'Oh, we need that violin with the timpani drum.' It's, like, no.

"I don't really care," Bolan added. "What I don't like is when I go to see a band and it's just so damn obvious they're either no singing, not playing, or there's just so much stuff or [they're] trying to fill it in, like more guitars. If it's another guitar, just get another guitar player. But if it's a whole bunch of stuff and basically a crowd is going and watching people move to listening to the record, that's when it starts to bother me. I just tend not to go see bands like that because it's just not my thing.

"SKID ROW, we never use tracks, Rachel repeated. "Well, for anyone that's gonna be technical, before 'I Remember You', we do run the sound of thunder in the beginning. It's not really thunder… But that's as far as it goes with us.

"We were doing the song 'Tear It Down' off the new record, and there's a lot of backing vocals on that that we tracked — gang vocals. And when we were doing 'em live, it didn't sound like enough. So we have two guys on our road crew that sing really, really good and are really good musicians, so we put them on the side of the stage with the mic, made no bones about it and they helped us with the gang vocals and the singing.

"For SKID ROW, we wanna give the best experience a fan can have within what we can do without relying on stuff like that," Rachel added. "But if you use it and you need it, I don't care. Do it. I'm not gonna hate a guy for doing it.