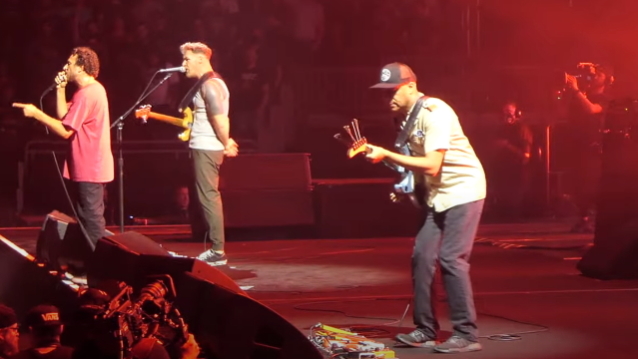 RAGE AGAINST THE MACHINE frontman Zack De La Rocha reportedly injured his leg during the second concert of the band's reunion tour Monday night (July 11) in Chicago, Illinois. As a result of the injury, De La Rocha performed multiple songs while seated on a monitor.

The incident apparently happened four songs into RAGE AGAINST THE MACHINE's set at the United Center, while Zack and his bandmates were performing "Bullet In The Head", a classic song from the group's 1992 self-titled debut album.

De La Rocha reportedly attempted to stand at various points during the remainder of the set but was unable to put any weight on the injured leg.

The singer ended up being carried off the stage at the end of the concert.