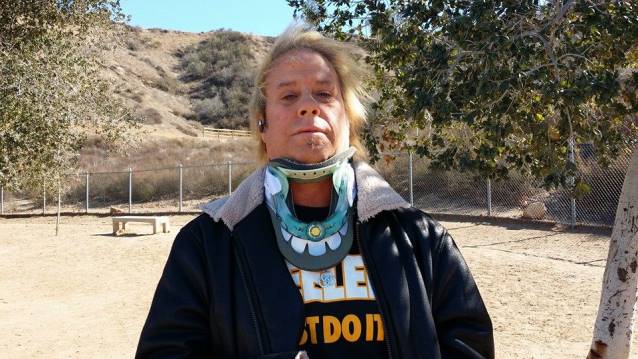 RATT drummer Bobby Blotzer will sit out the band's appearance at the Monsters Of Rock cruise — which takes place March 29 to April, sailing from Miami to Nassau to Monster Island aboard the MSC Divina — because he has not yet fully recovered from the neck surgery he underwent last October. Filling in for him will once again be Jimmy DeGrasso, who has previously played with Y&T, WHITE LION and MEGADETH, among others.

Says Bobby: "My neck is not playing ball, so I'll be getting more cortisone next week to crush the burning pain that doesn't want to let me be in peace. Too much stress!

"Sorry I can't be there to rip for you and really don't know when I'll see you all again. 'Til then, enjoy the cruise lots of good friends playing and attending. Say hi to [RATT guitarist] Carlos Cavazo for me. It won't be same, but as I always say, the more ya drink the better we sound."

Blotzer previously missed three RATT shows in January. All three dates were played with DeGrasso behind the kit.

Fan-filmed video footage of RATT's January 22 concert at the The Phoenix Theater in Petaluma, California — featuring DeGrasso on drums — can be seen below.

RATT will spend most of 2014 working on a new studio album, to be released before the end of the year. The band's lead singer, Stephen Pearcy, told the weekly two-hour classic hard rock and metal show "Noize In The Attic" (web site): "We've actually been writing for the new record for quite some time. Warren [DeMartini, guitar] and I actually went into the studio and cut a song. So hopefully a new RATT record this year is what we want. Our 30th-year anniversary and our tenth record, so it'll be OK."

He added: "Warren and I are spearheading the next record to be what it should be — more EP [1983], 'Out Of The Cellar' [1984] thing. Just real hardcore, basically. We've already recorded [one track], like I said. And if this song we recorded is the only song ever released, I'd be way happy…

"We just have so much good riffs and music we haven't even tapped into. It's good stuff. I mean, it excites me, and if I'm excited… I'm way into it.

"Warren's got some great shit going on right now, and it's perfect timing. Like I say, tenth record, 30th anniversary.

"We want a record out; that's what we want. We're going into the studio soon enough. We already have a producer, so it's just a matter of getting in there.

"We're gonna start recording the RATT record hopefully in the next few months, and it'll definitely be out this year. And we're trying not to do shows, even though there are some on the books. But the less shows we do, the better, because I'd like to just get the record done. And that's where I'm at. I want a new RATT record for the 30th year, and we'll take it from there. We'll do shows here and there, but it's not a priority at all."

Pearcy also spoke about how former QUIET RIOT guitarist Carlos Cavazo has adjusted to being in RATT more than five years after joining the band as the replacement for John Corabi.

"[Carlos is] never gonna fill [late RATT guitarist] Robbin's [Crosby] shoes, but the fact that he's a flying-V guy and has a certain composure and he likes hard rock and he comes up with the rifffs... He wrote the licks for 'Eat Me Up Alive' and 'Best Of Me' on [RATT's last studio album, 2010's] 'Infestation' and I heard those riffs and I just started writing immediately. I knew exactly what to write with his music. So if he brings shit like that around again, it'd be great."