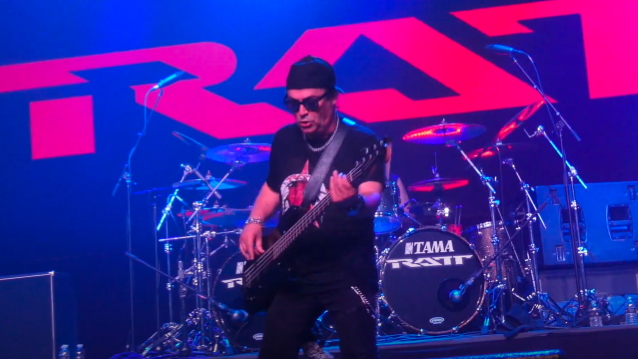 RATT's JUAN CROUCIER On EDDIE VAN HALEN: 'There Will Never Be Anyone Quite Like Him'

RATT bassist Juan Croucier has reflected on the passing of Eddie Van Halen, calling him "a true innovator" and "a leader."

On Friday (October 9),Croucier took to his official web site to share the following note: "My personal condolences on the passing of Eddie Van Halen to his loved ones, band mates, friends and fans. As a musician, everyone knows he was simply remarkable and ahead of his time. He forced other guitar players to try to keep up with his virtuosity and frustrated the rest who couldn't at that point in time and beyond. There will never be anyone quite like him. A true innovator. A leader. The best of the best.

"His passing hit me particularly hard because (among other things) we go all the way back to the mid-seventies club days together. Before they made their first record our bands often played together. I remember playing with them when they were a cover band with just a few originals. My band opened for them when they played the Starwood and Gene Simmons and Paul Stanley came to see them play. We all knew how special Eddie Van Halen and his band were. Even then they were absolutely amazing. I remember thinking (as I watched them perform back in the day),'If these guys can't make it, no one in this town can.' They were that good, they had it all. I was also there the night they played the Whisky and executives from Warner Brothers walked in to see them — two or three songs into their set. I knew right then and there it was a done deal for them. A few weeks later, rumors started going around that VAN HALEN had signed to Warner Brothers. (Ironically, we were direct support for them on one of their last shows ever at Rock USA in 2013.) So, VAN HALEN getting their record deal back then gave all the other local bands hope…hope that we could also get a chance to prove ourselves worthy someday.

"Eddie Van Halen and his band were the ones that spearheaded that movement and opened the door for all the other rock bands getting signed from L.A. / Hollywood. They were the reason so many bands came from across the nation and even the world to try to make it in L.A. And the rest was history… Eddie Van Halen and his band were the forerunners of an entire movement in rock music. There is an immeasurable debt of gratitude owed to what he and his band accomplished for the genre. They will always be revered for that accomplishment. I can't imagine what the rock world would have been like without VAN HALEN at the forefront of that movement. God bless him.

"Thank you, Eddie. You will be sorely missed. RIP".

Eddie died on Tuesday (October 6) at the age of 65 at St. John's Hospital in Santa Monica, California. His wife, Janie, was by his side, along with his son, Wolfgang, and Alex, Eddie's brother and VAN HALEN drummer.