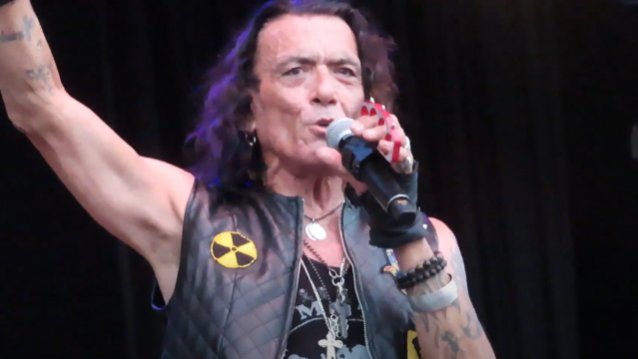 In a new interview with Radioactive MikeZ, host of the 96.7 KCAL-FM program "Wired In The Empire", RATT singer Stephen Pearcy once again opened up about his private three-year battle with liver cancer. He said (as transcribed by BLABBERMOUTH.NET): "[Right now I am] just monitoring [everything regularly]. And it's all good. And I support people who give me a chat back on health and this and that. You never know. I went in for a test, and that's how I found out. Blood check, which is what you should do. And they went, lo and behold. So it kind of wakes you up now. And then everybody is passing, is dying around me — family and friends and musicians — of cancer, and it's so disturbing; it really is disturbing. Live life, love… Every day the foot above ground is a good day."

Pearcy previously discussed his cancer battle in a summer 2021 interview with Shawn Ratches of Laughingmonkeymusic. At the time he said: "Everything's kind of copacetic now. I'm on a ritual and monitoring things. And do I really wanna put myself through all this stuff, with taking care of your health and the broken bones and knees, staph infection.

Pearcy admitted that he "should have monitored" himself better and "took it easy. The knees are one thing. I mean, yeah, that was enough," he said, referencing his January 2019 knee replacement surgery. "But then the double whammy with finding out about the C. But now I feel like I need to say something just because, hey, take care of yourselves. I wanna see our fans and friends, I wanna see them around. I mean, we've gotten to know a lot of these people 36, 37 years later. And if it can help one or two or however many people, then great. I know some really good friends of mine that are in worse shape, and it's just a terrible thing. I've lost family through it, and it was time to step up and say, 'Well, unfortunately, you got smacked, Stephen, so do something positive about it.' You know, without being poster child, which I really don't wanna be."