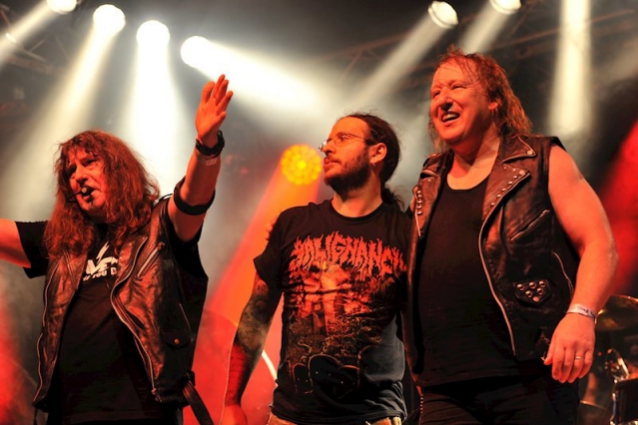 RAVEN's New Album Will Be 'Fast' And 'Crazy'

RAVEN bassist/vocalist John Gallagher recently spoke to The Metal Voice about the band's long-awaited follow-up to 2015's "ExtermiNation" LP, tentatively due this fall.

"We have had this pain-in-the-ass process of getting the new album together," he said (see video below). "Just about every hurdle or impediments that you can invent got put in the way of it. But it will be coming in September. And we hope to have at least one single out beforehand — around July, I'm thinking. I think it's gonna blow a lot of people's minds. We've got Mike Heller [FEAR FACTORY] on drums, who's phenomenal, as people who have seen us over the last couple of years can testify. I guess you can take the live album we put out last year ['Screaming Murder Death From Above: Live In Aalborg'], and that is a good introduction as to what we're gonna be dealing on this new studio album. It's fast, it's crazy, there's a lot of insane playing on it, and we really just went balls out all the way through. We're incredibly happy with it. And so far, the people who have heard stuff are, like, 'Are you fucking kidding me?' [Laughs] So, it's a good reaction to get."

RAVEN's new LP will mark the band's first with Heller, who replaced Joe Hasselvander in 2017.