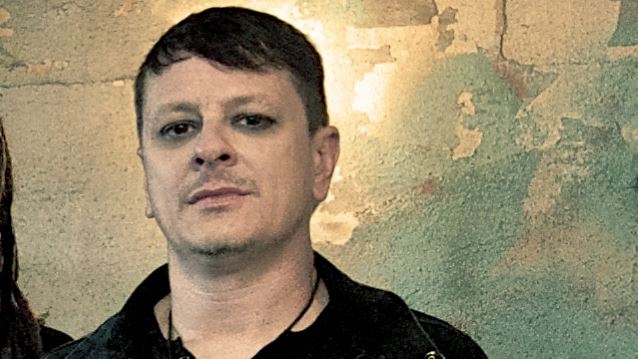 Metal Wani's Jake Patton recently conducted an interview with KORN drummer Ray Luzier. You can now listen to the chat below.

Asked if KORN has begun writing music for the follow-up to 2016's "The Serenity Of Suffering" album, Ray said: "We're definitely talking about it. We're always writing stuff — I mean, it's a non-stop machine. Even on the road, we have three tour buses that are always in progress. Jonathan [Davis, vocals] always has his studio on his bus; you can't eat on his table on his bus, because there's speakers and several laptops and things going on — he's always creating. So there's always ideas. I know the beginning of next year, we're definitely gonna start getting together and [working on new music as a band].

"On 'The Serenity Of Suffering', Head [guitarist Brian Welch], Munky [guitarist James Shaffer] and I got together first and got probably 20 riffs and grooves and ideas going, and then once we start everybody involved, it's time to get a producer," he continued. "Nick Raskulinecz did such a great job on 'The Serenity Of Suffering', and I'd love to use him again, but I'm sure we'll have that meeting soon, talking about another producer and possibly Nick again.

"KORN's a really difficult band to mix too, and Josh Wilbur, who mixed 'The Serenity Of Suffering' is just really on his game. Let's face it — we can play our balls off and do a great performance, but if it's not heard in the right way, then it doesn't really get across to the audience. So it takes a really special guy to mix this band. I think Josh definitely nailed it on our last record."

Asked if he thinks KORN's next album will follow a similar musical direction to "The Serenity Of Suffering", Ray said: "It's funny, 'cause even the dubstep, kind of experimental record we did [2011's 'The Path Of Totality'], at the end of the day, it still sounds like KORN. It's funny, 'cause Head and I are always the metalheads of the band — we always want it to be heavier; I think we all do. KORN has such a unique sound that I think that it's inevitable it's gonna be towards the heavy side. But there's been talks about doing different things and that, but I think, depending on who the producer is and where everyone's heads are at, I think it's gonna be an even heavier record than 'The Serenity Of Suffering' — I'm hoping, anyway."

Welch told Good Company earlier in the year that KORN's next disc would likely be "a combination of maybe both ['The Serenity Of Suffering'] and [2013's 'The Paradigm Shift']. We'll try some new stuff though, but we're gonna definitely focus on guitars again."

"The Serenity Of Suffering" featured a guest appearance by SLIPKNOT frontman Corey Taylor on the song "A Different World".

The cover art for "The Serenity Of Suffering" was created by acclaimed artist Ron English. It depicted a teenage KORN fan at a dystopian acid-nightmare funfair who is clutching a disembowelled and skeletal version of the doll who adorned 1999's "Issues".

"The Serenity Of Suffering" marked the second KORN album since the return of Welch.