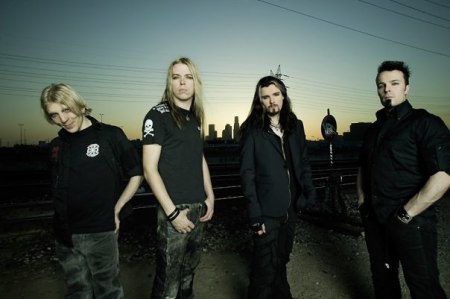 Eicca Toppinen of the Finnish rock cello quartet APOCALYPTICA has explained to The Pulse Of Radio why the band was forced to pull the vocals of SHINEDOWN frontman Brent Smith off their current single, "Not Strong Enough". Toppinen said that the whole thing was a case of record company politics. "When we were speaking with Brent and SHINEDOWN about the collaboration, we checked their schedule," he said. "It was like, 'Okay, they will be over with their album.' Nobody expected that they will release seven singles from one album ('The Sound Of Madness'). They were still going on radio in the fall with their own singles, and then the record company was like, 'Okay, but you can't go out with the Brent version of 'Not Strong Enough'. And then we started to think about, 'Okay, what shall we do? We have a great song in our hands, but we are not allowed to deliver it to radio.'"

APOCALYPTICA launched a U.S. tour earlier this month after it was postponed last fall due to band member Perttu Kivilaakso falling ill. The group next performs on Thursday night (March 17) in Sayreville, New Jersey.