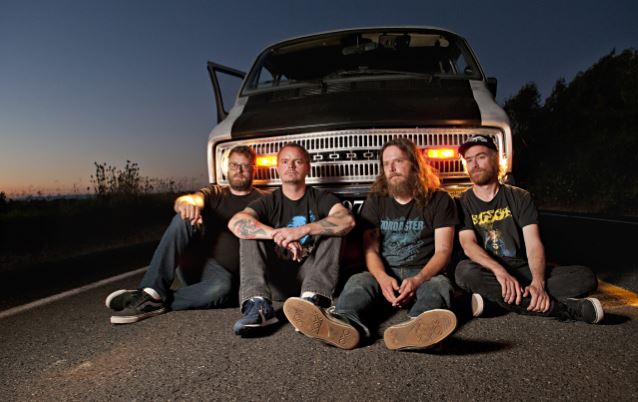 Portland, Oregon's RED FANG, which recently celebrated its tenth anniversary with a trio of Northwestern U.S. performances, will return to the studio in February, recording the follow-up to "Whales & Leeches" with famed producer Ross Robinson (KORN, LIMP BIZKIT, SEPULTURA).

"I've never been more excited about making a record in my life," said drummer John Sherman. "The writing process for this album has been super fun and full of energy and good vibes. And the opportunity to work with Ross Robinson is so crazy — I've got goose bumps just talking about it!!"

RED FANG, which is trekking from Portland to begin recording at Robinson's Venice, California studio, will play two shows en route: February 17 at Jub Jub's in Reno and February 18 at The Catalyst in Santa Cruz.

"Whales & Leeches" was released in October 2013 via Relapse Records. The 11-song album landed the band on "The Late Show With David Letterman" and in a world of trouble in the zombie-infused video for "Blood Like Cream", which featured guest Fred Armisen. Alternative Press said "Whales & Leeches" was "bigger, bolder, heavier, catchier and even more savagely fun."