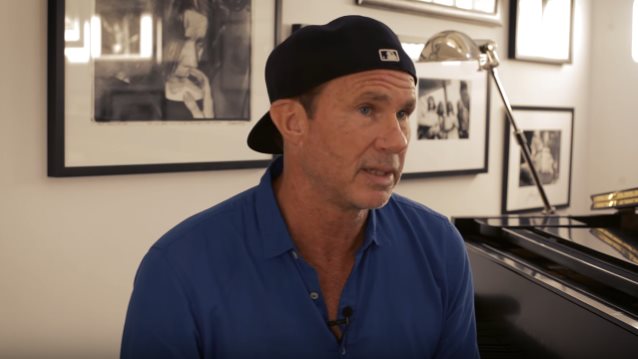 According to TMZ, RED HOT CHILI PEPPERS drummer Chad Smith's wife is facing a possible ban from all school functions after she was accused on Thursday (December 15) of verbally and physically assaulting actor Scott Baio over his support for Donald Trump.

Baio and Nancy Mack were attending an event for their children last Saturday (December 11) in Thousand Oaks, California when Mack began to berate Baio. Baio claimed that although he asked Mack to stop, she continued to harass him and ask why he supported Trump after the latter's "grab them by the pussy" comments in a 2005 video were exposed.

Mack allegedly continued to repeat the lewd remark over and over despite Baio asking her to not say it in front of children. She reportedly told Baio that everyone should hear it since the soon-to-be president said it.

Baio claimed that Mack then grabbed him beneath his arms and began shaking him. Witnesses insist she was actually attempting to demonstrate how Trump hugs women, and didn't intend to attack Baio, but police are now reportedly investigating Mack for battery.

Sources close to the situation tell TMZ that parents of the other children at the private school were livid and filed complaints with school officials.

An official at the school wouldn't say what, if any, punitive action it would take against Mack, but said, "Our highest priority is the safety and privacy of our children and their families."

Baio was a vocal supporter of Trump during the 2016 presidential campaign and made a speech at the Republican National Convention in late July.

Neither Chad Smith nor his band have issued a comment on the matter. The CHILI PEPPERS supported Bernie Sanders during the campaign, playing benefits for the senator from Vermont, who failed to wrest the Democratic nomination from Hillary Clinton.

The band has just released a music video for "Sick Love", the latest single from the band's chart-topping eleventh studio album, "The Getaway".

The CHILI PEPPERS recently expanded their 2017 North American tour, which kicks off on January 5 in San Antonio and will continue through late June.