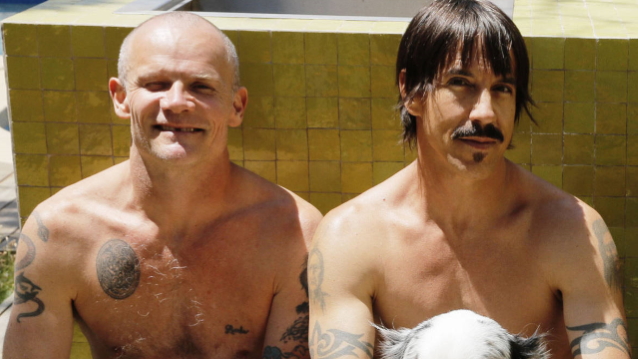 Flea spoke about the longtime friendship in a new interview with The Guardian while promoting his memoir, "Acid For The Children", which arrived on Tuesday (November 5).

In the book, Flea recalled that Kiedis was "the missing link I never considered" and "unlike anyone" he had previously met. He added: "Among my friends, I was the guy who was always trying to do something that would freak people out. Then I met Anthony and he matched me step for step. We got up to all kinds of crazy shit."

Flea also described Kiedis as "controlling" in the memoir, but declined to elaborate on it to The Guardian, saying the two bandmates had "issues" between them that he wasn't willing to discuss. But Flea did say: "He doesn't accept that I'm different and that things that excite me may not excite him. He's looking to be the alpha."

Flea also talked about how Kiedis's drug abuse affected him over the years, saying, "It's painful and scary and sad... because the rationale of someone who's a drug addict is disingenuous and hollow and misguided."

The bassist told CBS News in a separate interview that he initially connected with the singer because "we were both apart from things. Both outcasts in a way. And our relationship is a strange one and a difficult one, and one that's often antagonistic. We rub against each other the wrong ways... I know that I love him."

Flea also spoke about his relationship with Kiedis in an interview with Radio.com. He said: "Maybe I should have written more about just the joy and love and all the creative stuff that we've shared. 'Cause we've just had a fantastic friendship and relationship. And it's been difficult. We're both very intense people, and we butt heads, and he's someone that I trust and love. You hurt the people you love sometimes. And I'm sure that I have been a complete asshole to him and judgmental many a time when I didn't need to be. I might not even be conscious about it, 'cause I was too bullheaded and pigheaded to see what I was doing."

According to Flea, bandmates don't necessarily have to be on the same page to make great music. "If I wanted to be in a band with everyone who thought like me and did what I wanted, then I might as well just do it by myself," he said. "What makes it really difficult is that we disagree all the time and we fight and we hurt each other's feelings… The fact that we all come with a different idea and bring a different thing is the thing that makes the band work. And at our best, like the best shit we've ever done, we were fighting like cats and dogs and disagreeing, but ultimately respecting what everyone was bringing in and knowing that it's unique to who they are."

Elsewhere in the memoir, Flea described his own battles with drug addiction and his grief when early CHILI PEPPERS guitarist Hillel Slovak died of an overdose at the age of 26.

"I was so angry at him," Flea said. "For a long time, I kicked myself that I didn't know how to be there for him in a way that I could have been. It's a hard thing."