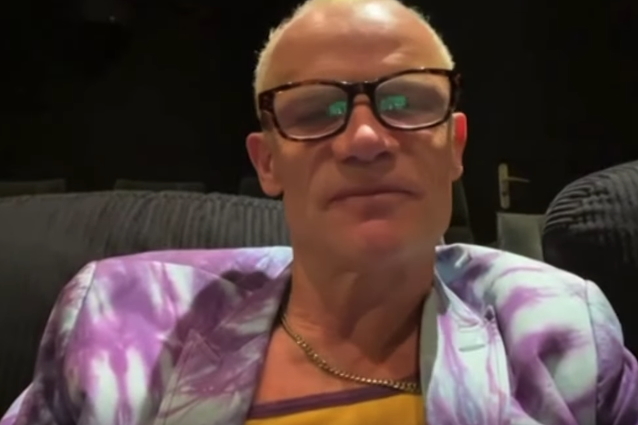 RED HOT CHILI PEPPERS' FLEA On TAYLOR HAWKINS: 'He Was A Kind, Generous' And 'Fun Dude'

RED HOT CHILI PEPPERS bassist Flea has paid tribute to FOO FIGHTERS drummer Taylor Hawkins, who died more than a week ago at the age of 50. Speaking to Radio X's Johnny Vaughan, he said about Taylor's passing (as transcribed by BLABBERMOUTH.NET): "[It was] absolutely shocking. I love Taylor. He was an uplifting dude. Before I ever met Taylor and long before he ever played in the FOO FIGHTERS, one of my best friends growing up, my friend Tree [Keith Barry] who I started my music school with, he was teaching music at a music school down in Orange County here in L.A., and he was, like, 'Man, there's this kid here selling guitar strings, and he's a star. He's a drummer, and I'm telling you he's gonna be a rock star.' And that was Taylor. And that was long before he played with Alanis Morissette.

"But I always loved Taylor," he continued. "I had so much fun with him. We toured with them for years and years. And he was best friends — he was extremely close with our drummer, Chad Smith. And it's a very devastating experience for Chad and for everyone he was close to, because he was a kind, generous, just fun dude, and a killer drummer. And love to his family and love to everyone that knew him. And God bless his beautiful heart."