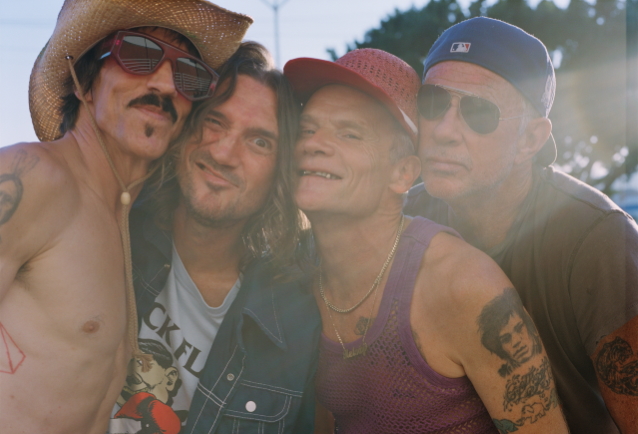 RED HOT CHILI PEPPERS have announced that they will embark on a global stadium tour in 2022.

The news of the upcoming return to the live stage was broken via a fake-news comedy bit by KHOT channel personalities Johnson Hammerswaddle, Todd The Squirrel and Randy Raindrops — a.k.a. Anthony Kiedis, Flea and Chad Smith — who confirmed that RHCP will be touring "the whole world" beginning June next year, with the American leg kicking off in July.

A press release adds that "the boys are firing on all cylinders, their hearts are full and they're fixing to unleash an infinite river of creativity, and rock your world.

"The band is grateful to be working with event producers Live Nation in this endeavor.

"All the tour dates, sales information, support acts and other factoids will be available shortly.

"The RED HOT CHILI PEPPERS have been around, and have not just fallen off the turnip truck, but to a man, they have never been more thrilled, bursting with commitment and purpose, as they are regarding this upcoming tour. They have no interest in resting on past accolades, awards or commercial success, this is a mission, they intend to channel the most mighty spirits, and give everything they've got."

The RED HOT CHILI PEPPERS have not yet announced any tour dates, venues or openers.

This past May, Smith said that "it's been really fun" working again with guitarist John Frusciante.

Frusciante rejoined RED HOT CHILI PEPPERS in December 2019 after the dismissal of Josh Klinghoffer, who had been in the band for 10 years.

Smith discussed RED HOT CHILI PEPPERS' renewed collaboration with Frusciante in a new interview with SiriusXM's Pop Rocks. He said: "He's back in the group, and it's really exciting and fun, and we just kind of picked up where we left off. We've known each other for so long — obviously, 30-plus years — so it's like putting on a nicely well-worn pair of shoes that feel really good, and you get back in there and it's comfortable and a little bit different, but still we're doing our thing. So it's been really fun."

Regarding RED HOT CHILI PEPPERS' plans to release the follow-up to 2016's "The Getaway" album, Chad said: "There's been no hurry, with what's happened over the last year or so. So we've been kind of taking our time, and we have lots of new music, and we're very excited about it, and when it's done, it's done, and we'll put it out, and we'll go play some concerts next year. We look forward to being in front of people again, like everybody wants to be so badly, us included. Not only having new music to play, but also we just wanna play live. And that's such an important part of life's experiences and certainly of being a band. It's really important to us. We were gonna play last summer. But we want it to be safe for everyone and a really good experience for everyone, so we pushed everything off, but we're coming back, and it's gonna be great."

Last October, Frusciante told the Australian digital radio station Double J that playing with his RHCP bandmates Anthony Kiedis, Flea and Smith once again was like "returning to family. I'm extremely comfortable with those people. It was as if no time had gone by at all when we started playing, pretty much, with a couple of minor exceptions, like how Chad and I gradually got our communication together in a new way. Basically, we're all just as comfortable with each other as we ever were, and it just felt like that right off the bat."