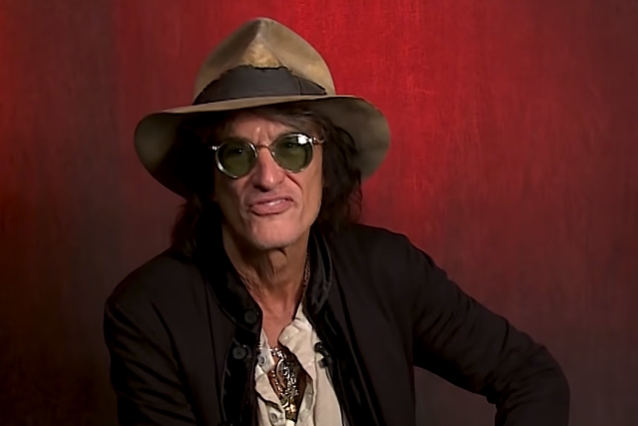 **UPDATE**: Joe Perry's publicist has released the following update on the guitarist's condition:

"Following a guest performance during Billy Joel's show last night at Madison Square Garden, Joe Perry experienced shortness of breath and was treated backstage by paramedics who gave the guitarist oxygen and used a tracheal tube to clear his airway before taking him to a hospital. This morning Perry remains in the hospital where he is alert and responsive. The AEROSMITH guitarist will be unable to appear today at Rock And Roll Fantasy Camp in Florida and apologizes to those attending. Perry is expected to return to the road later this month."

According to TMZ, AEROSMITH guitarist Joe Perry was rushed to the hospital Saturday night (November 10) after performing with Billy Joel in New York City.

Perry had just finished playing "Walk This Way" with Joel at Madison Square Garden and had gone back to his dressing room. A source connected with the concert told the tabloid site that Joe collapsed and "looked terrible."

Paramedics rushed to the scene and worked on the 68-year-old for around 40 minutes. A trachea was put down his throat to clear the air path and one eyewitness told the site "Joe did not look good." The ambulance personnel then put the guitarist on a stretcher, gave him oxygen and rushed him to a hospital.

Since its original report, TMZ has posted an update, saying that Perry had been having "breathing issues" involving congestion in the lungs for the last few weeks and "it came to a head last night." According to the site, Joe is still in the hospital, but "he's awake, doing well and could be released as early as Sunday afternoon."

Perry is scheduled to kick off a solo tour on November 30 in support of his most recent solo album, "Sweetzerland Manifesto".

Back in July 2016, Perry collapsed onstage mid-song during a HOLLYWOOD VAMPIRES concert in Brooklyn. He was subsequently hospitalized, as rumors of cardiac arrest spread. Sources later said that "a combination of dehydration and exhaustion" was to blame.

"I've certainly had a couple other instances where I've pushed myself over the edge, but never in such a public way, you know?" Joe told the Boston Globe earlier this year. "Certainly we're seeing more and more people pass from one thing or another, whether it's age or abuse. And I don't want to be on that list. So I learned a lot. But also, frankly, I rediscovered the guitar. You know, a lot of things that I took for granted and left behind in this long and varied career, I kind of went back to again."