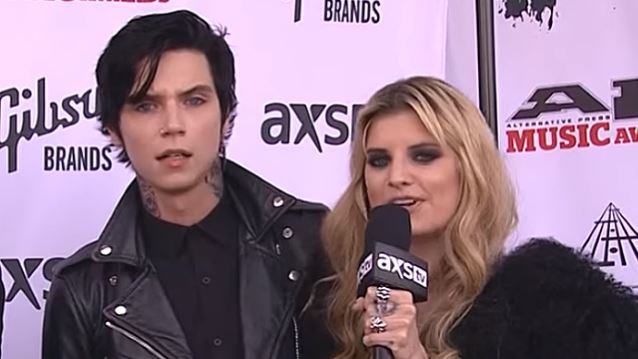 According to TMZ, BLACK VEIL BRIDES vocalist Andy Biersack and his wife, Los Angeles-based singer/songwriter Juliet Simms, who is best known as a contestant on the 2012 season of the NBC reality TV talent competition "The Voice", allegedly got into a physical fight on an American Airlines flight over the weekend.

Simms and Biersack were flying from Charlotte to Los Angeles Sunday night when they started feuding in their first-class seats. Witnesses tell TMZ that Juliet got louder and louder, after which she claimed that Andrew hit her in the face. Flight attendants warned them to calm down, but 20 minutes later, they were arguing again and had to be separated. Juliet remained "out of control," and an air marshal ended up handcuffing her.

Video footage of part of the exchange, which shows Juliet apparently accusing Andy multiple times of breaking her ribs, can be seen below. "A guy can break a girl's ribs, but you can't touch another guy''s face," she can be heard saying on the tape.

Once the plane landed, police detained Simms and handed her off to the FBI, which had jurisdiction since the fight happened in the air. Law enforcement sources tell the site she was questioned and released.

Biersack and Simms have since spoken to TMZ and have blamed the fight on the fact that she had too much to drink after not consuming any alcohol for several months. They told TMZ that "everything's fine" between them and they are cooperating with the FBI investigation.

Biersack and Simms got married in April after dating for five years.