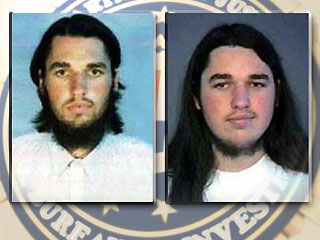 The article in the January 22 issue of The New Yorker magazine by Raffi Khatchadourian entitled "Azzam the American" discusses Adam Gadahn (video of Adam describing the 9/11 pilots, photo) — a U.S. citizen from Southern California and a member of Al Qaeda's "media committee" who wrote in a web posting that he was obsessed for a time with "demonic heavy metal music" before moving to Orange County and discovering the Islamic faith. An excerpt from the story follows:

By the time he turned fifteen, [Adam] had found another way to reach out to people beyond the farm. It was through an obscure musical subculture called death metal.

Death metal is a severe offshoot of heavy metal, a reaction to the superficiality of Eighties popular culture. In the early Nineties, bands that played death metal considered themselves part of an élite vanguard. They tuned their guitars in unconventional ways, and some, influenced by classical musicians, composed songs that required high degrees of discipline and technical virtuosity to play. Onstage, artists often wore sweatpants to demonstrate their athleticism and lack of pretense; the genre's signature vocal style is a heavy growling chant. ("We like it when it's simply rotten," one musician told me.) It is a subculture in love with its offensiveness, and obsessive about guarding its artistic purity.

Phil Gadahn [Adam's father] "wasn't particularly crazy about it," Rich Haupt [a record collector who became a friend of Adam's father in the Nineties] said, but had he been able to look past the dark aesthetic he might have understood his son's interest in the music. "Death metal is an extremist movement," Spinoza Ray Prozak, a former death-metal D.J. who knew Adam, told me. "We're people who don't like modern society. We think it's a path to death, doom, destruction, horror; it is part of the moral way we view the universe. A lot of death-metal songs are about disease, especially the kind of disease that strikes from within, incapacitates you, and there is no way to fight it, and you have to wait for it to slowly absorb you. A lot of songs are about paralysis, injury, necrotic diseases." Where Phil Gadahn in his music focussed on redemption, death metal focussed on decay. Members of the genre generally profess to reject Christianity, but they do so within a religious framework, using the language and imagery of paganism or Satanism, rather than of atheism. Fans who outgrow the music, as most do, often enough become religious.

It's unclear when Gadahn first encountered death metal, but by 1993 he had decided to learn as much about it as he could. Many of its followers, he found, were cerebral teen-agers like him. They were searching, not so much for a way to release their rage but for an experience that was authentic and powerful. "Where heavy metal gets a lot of the guys who lift weights and punch out beer cans, death metal is a really interesting combination of people, but it's a lot of just nerd," Prozak told me. Gadahn bought copies of small alternative magazines that included lists of fans who wanted to trade albums or mix tapes. He wrote to people on the lists, and the envelopes that came back were stuffed with cassettes and slips of paper containing the names and addresses of still more fans who wanted to correspond. "He was probably in contact with, minimum, several hundred people worldwide," Prozak said. "He took it very seriously. He read up on the music, he researched it as best he could. And he went from a guy who had about ten albums and thought it was neat to a guy who had access to most of the genre." At the time, the Internet was not yet in widespread use, and the death-metal underground must have seemed both exclusive and far-reaching. More important, its correspondence network made geography irrelevant. It was a world that Gadahn could belong to.

To the teen-agers in the metal underground who got to know Adam Gadahn, he remained an elusive figure. As one friend recalled, he was "a voice on the phone, a couple of tapes in the mail, some letters." A few of his pen pals remember that he was overly earnest; others said that he was goofy. He talked about social issues, or about the Disney comic books featuring Scrooge McDuck, and Huey, Dewey, and Louie, which he loved. He sometimes kept friends on the telephone for so long that they wondered how he could pay for the call. In all his conversations, Gadahn came across as soft-spoken, polite, highly literate, and passionate. He befriended college students who were years older than he was. "Adam was really intelligent and a really nice guy," said John E. Brown II, who was a student at the University of Wyoming when Gadahn first wrote to him. Chris Leffler, who had a band in Kentucky called CATACLYSM, exchanged several letters with Gadahn and "never realized how young he was." Jeff Hayden, the guitarist of TIMEGHOUL, a band from Missouri, remembered him as "a personable, comedic young man."