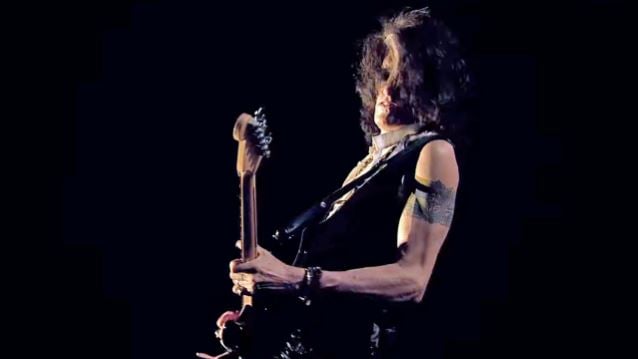 Sources close to Joe Perry and the HOLLYWOOD VAMPIRES have told Premiere Networks that a combination of dehydration and exhaustion caused the guitarist to collapse backstage in Brooklyn, New York on July 10, resulting in a trip to the hospital.

After being taken to nearby Coney Island Hospital, Perry was transferred to Columbia Presbyterian in Manhattan. He has since been released and flew to California, where he is resting.

AEROSMITH singer Steven Tyler, who just released his debut solo album, said that he was extremely worried about Perry, claiming that he has been kept in the dark on his banmate's status — with some reports claiming Joe actually suffered a cardiac arrest. "I've had calls in for two days and I'm really concerned," Tyler said. "I don't know what's going on with him and his management people. I just don't know and it's starting to scare me a little bit. I know they're putting out nothing but, 'He's recovering, he's really good, he fainted, exhaustion.' But I know my brother. And he's just about the only other guy that's just as passionate about his art as I am. He's always askin' me to do three, four shows in a row. I know how to maintain my career, my health. I don't think he knows how to."

Tyler told The Pulse Of Radio it's very likely that the VAMPIRES' itinerary is simply too strenuous to allow Perry the time needed to recharge between gigs. "I think he's out there and someone's over-booking him," he said. "Even though one could say the band booked themselves; well, that's righteous of 'em, but they'e doing like eight or nine shows in a row — or five in a row. And I think they're all a little burnt. I think they need to look at that, Y'know, not young anymore, right?"