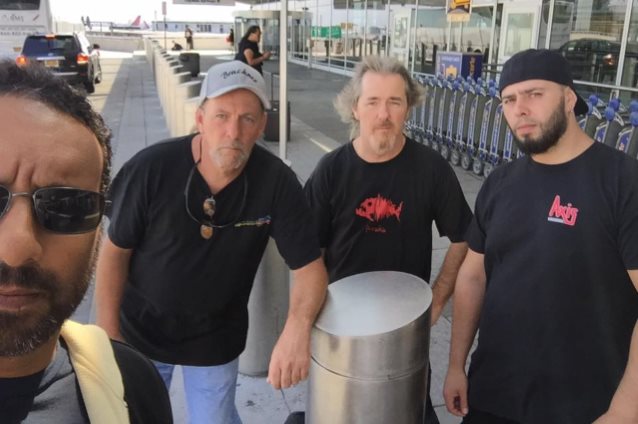 Conny Schiffbauer of Germany's Rock Hard magazine conducted an interview with the reunited cult New York thrash metal act DEMOLITION HAMMER during this year's 70000 Tons Of Metal cruise. You can now watch the chat below. A couple of excerpts follow (transcribed by BLABBERMOUTH.NET).

On how the DEMOLITION HAMMER reunion came about:

Derek Sykes (guitar): "It's kind of something that we've been watching, or I've been watching, for a very long time. Our last show that we played, up until recently, was twenty-five years ago. I've kind of maintained web sites and things like that, and I've been just kind of listening to people talking about the band, and they started talking more and more and more and more. And I had the idea, went to Steve [Reynolds; bass/vocals] and said, 'Hey, what do you think? Maybe we [should] try it.' And he was, like, 'I don't know.' So it really just kind of sat for a while and I just sat in awe, looking at how many people were kind of into it. I didn't expect that at all. And then we reconnected with Jim [James Reilly, guitar] here, and it was great just all three of us hanging out and really just having a great time. And then we went to the Maryland Deathfest not last year, but the year before. And our friends' band SOLSTICE played one of our songs, and we saw the crowd went nuts, and that's really when it hit us: 'Holy shit! We can actually do this.' So we dusted off the guitars, dusted off our arms, and tried to re-learn stuff that we hadn't literally played in twenty years. And we got most of it right."

Steve Reynolds (vocals, bass): "Derek had been talking to me about it and said, 'Hey, there's really a lot of interest,' and I said, 'Yeah, you're crazy, you're delusional. No one cares about DEMOLITION HAMMER.' But I'm not somebody who's very connected with the Internet or Facebook or anything. He was persistent about it, and like he said, when we went to the Maryland Deathfest and I saw it with my own eyes how much interest there was, I said, 'Okay, you're not crazy. Maybe there is something about this.' Then when we talked to James about it and he was in, that's what really put us over the top."

On whether there are plans for DEMOLITION HAMMER to record a new album:

Steve: "We've talked. But we were so busy just trying to work all this in, we haven't really solidified any plans for that. But we're still talking about it."

James Reilly (guitar): "Now that we see how well this is going, we do have it in our heads to start writing some new material and see where it goes."

James: "I think we can. As long as we stay true to ourselves and try not to be something we're not, it should work. I think it'll work."