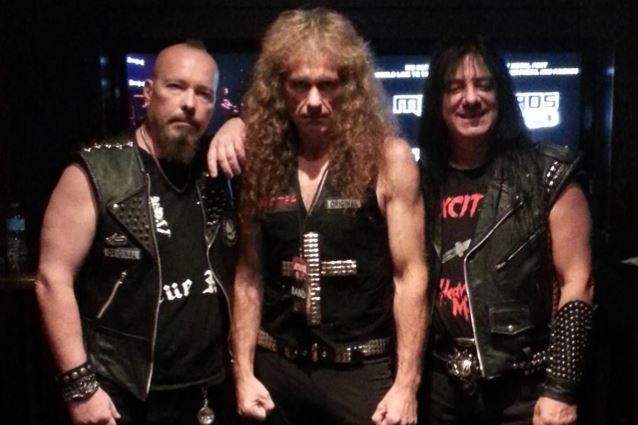 Kevin McGowan of the "Shortlife" podcast recently conducted an interview with guitarist John Ricci of veteran Canadian metallers EXCITER. You can now listen to the chat using the SoundCloud widget below. A couple of excerpts follow (transcribed by BLABBERMOUTH.NET).

On how the reunion of the original EXCITER lineup — Ricci, drummer/vocalist Dan Beehler and bassist Allan Johnson — came about:

Ricci: "They approached me. After the previous band broke up, my plan was to just take a year off, put my equipment in storage and just decide what my next move was gonna be. One day, where I work, a music shop in Bells Corners [in Ottawa], in walks Dan Beehler, walks in the store. And as soon as I saw him, I knew exactly why he was there. 'Cause we hadn't really spoken in about twenty years. Not that we didn't wanna speak to each other; we had no need to speak to each other. So he came up to me and said, 'Look, we know what's happened with the other EXCITER. I just wanted to let you know' that him and Allan are totally supportive of whatever I decide to do, and if I would consider getting back together with them, they'd be more than excited to do so."

On how he felt when he found out Dan and Allan were interested in reuniting with him:

Ricci: "I was shocked, because I had no idea they even felt that way. So I said to Dan, 'Give me about a week, 'cause I'm not really sure. I've gotta just make a decision.' But after about three days, I thought to myself it would be great if the original band was back together. Because when I was touring around the world with the other EXCITER, the fans and other musicians would come up to me and say, 'You know, you guys are really, really good, but we still prefer the original band.' I heard that over and over and over. And I'd say, 'I'm not with the original band. This is EXCITER the way we are today.' So it took me about three days to make a decision. So I thought, 'Okay, for sure, let's just get back together and just pick up where we left off.'"

On the response to the EXCITER reunion so far:

Ricci: "When we made the announcement on the Internet and our web site and on Blabbermouth, my e-mails didn't stop for, like, 48 hours. I mean, I had managers, agents, the fans, other bands that we know congratulating us on the reunion. And then the show offers started to come in. I mean, we haven't stopped playing since we reunited; we've been to South America, like, three times. We played the Sweden Rock Festival and Bang Your Head!!! festival. We did two nights in Osaka, Japan and so on and so on."

On the differences between how the EXCITER members communicate in 2016 compared to how it was in the 1980s:

Ricci: "We're much older and we don't… There's no big disagreements, and we don't bicker at each other. We would have, like, twenty-five years ago. But we don't really care about… If someone has a difference of opinion, we're not gonna hold a grudge; we just talk it out, like most marriages, you know. And then everything is fine. And then we just keep on partying and playing our music. We're sort of in this comfort zone now."

On whether there are plans for EXCITER to release a new studio album:

Ricci: "We are writing songs. Last year, we said we'd have it out this year, which is not gonna happen. But maybe next year we'll have it out."