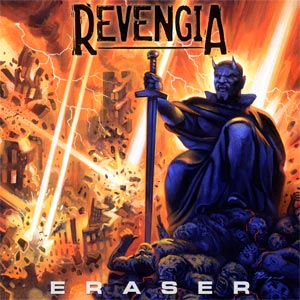 "As REVENGIA now is going to release [its new album] 'Eraser', we see the end of Daniel's work with the band. From the beginning he was asked to do 'A Decade in the Dark', which was meant to be a one-off thing. But then there were some new songs written and we decided to go on and make a new album. Now we want to promote 'Eraser' as good as we can with the possibility of doing shows. With Daniel already having a full-time band that is very successful, he could not see that he would have enough time for REVENGIA. REVENGIA is very grateful for Daniel's great contributions for two albums. He an extraordinary musician and a super guy, so thanks Daniel! Check out his drumming on 'Eraser', it's as great as ever."

Erlandsson commented: "With the release of 'Eraser' and REVENGIA now changing from a project to a more focused unit, I feel that I don't have the time needed to be a member anymore. I really enjoyed playing on the new album, and I wish REVENGIA the best of luck in the future!"

REVENGIA continued in a statement: "We also would like to introduce a new member in the band! We welcome Conny Pettersson as the new drummer for REVENGIA. Some of you know him from his other band ANATA. He has also played with bands like TRENDKILL and ETERNAL LIES (where he played with REVENGIA's Martin Karlsson). Conny's playing is intense, technical and tasteful so we will surely create some great music in the future!"

REVENGIA recently inked a deal with Soundholic Records for the Japanese release of its new album, "Eraser", Due on November 21, the CD will feature the following track listing:

Release dates for other territories have not yet been confirmed.

Check out the cover artwork by Joe Petagno at this location. An audio clip of the track "Eraser" can be downloaded here.

REVENGIA's last album, "A Decade in the Dark", was produced and mixed by Matti Almsenius at ZerOonE in Varberg during 2001–2004, and was released in June 2004 via Metal Fortress Entertainment.