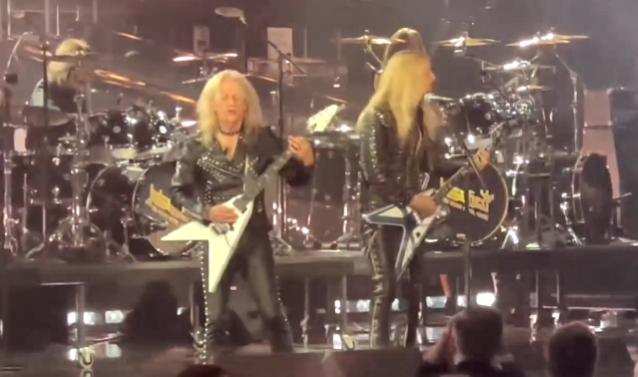 RICHIE FAULKNER: Performing With Both K.K. DOWNING And GLENN TIPTON 'Was An Experience I'll Never Forget'

Richie Faulkner says that performing with Glenn Tipton and K.K. Downing at last night's (Saturday, November 5) Rock And Roll Hall Of Fame induction ceremony in Los Angeles was an experience he will "never forget."

Halford, Hill, Tipton and Travis were joined by Binks, Downing and current guitarist Faulkner for a three-song medley consisting of "You've Got Another Thing Comin'", "Breaking The Law" and "Living After Midnight".

Earlier today (Sunday, November 6),Faulkner shared a photo from last night's event, and he included the following message: "One life, I'm gonna live it up!! What a night!

"I'm sure it was a flood of emotions for everybody involved and for all the fans, but to be up there with both GT and KK as part of a guitar TRIO with @judaspriest was an experience I'll never forget.

"A HUGE congrats to all the guys and to all the amazing artists who got inducted last night. It was truly surreal to be there."

In a 2011 interview with the Finnish newspaper Ilta-Sanomat, Halford stated about Faulkner's physical resemblance to a younger Downing: "People are saying, 'It's a clone. You've got some of K.K.'s DNA.' It's just the way it turned out. We made, like, a secret search. When we knew K.K. was not gonna be making the tour, we did a lot of secret, kind of, searching for another player. And Richie just happened to be the guy. And he just happens to look a little bit of the K.K. image, you know?! I think it would be silly to say, 'We looked for a guitar player that looks like Ken.' What we want is a very good metal guitar player, and that's what Richie Faulkner is."

The 2022 Rock Hall induction ceremony will air at a later date on HBO and stream on HBO Max.