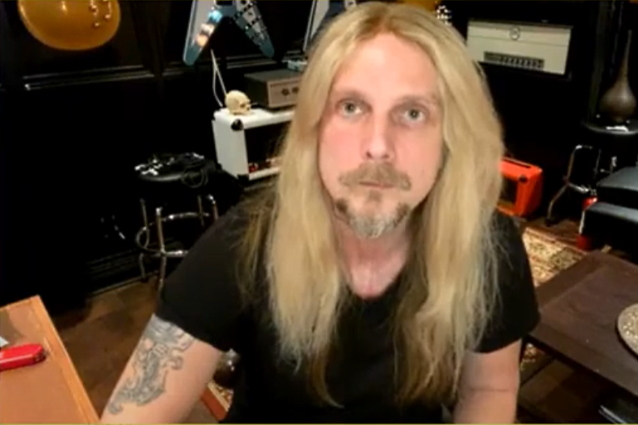 During an appearance on the "In The Trenches With Ryan Roxie" video podcast, JUDAS PRIEST guitarist Richie Faulkner spoke about the band's recent announcement that it would embark on the next leg of its 50th-anniversary tour as a quartet. He said (as transcribed by BLABBERMOUTH.NET): "Rob [Halford, PRIEST singer] called me up and he said, 'Falcon, would you be able to handle all the guitar parts on your own without a second guitar player?' And I said, 'Yeah, I probably would be able to handle them. It would probably take a bit of moving around and doing things a bit differently — a couple of more pedals and stuff like that.' 'Cause he was thinking… I think one time PRIEST were a four-piece and he was thinking about going back to that and Glenn [Tipton, PRIEST's longtime guitarist who is battling Parkinson's disease] coming out when he could. I think that was the idea in his mind. And I said, 'Whatever you wanna do, boss. If that's what you're thinking, if everyone else is on board with it, whatever you wanna do.' So I went and bought… I think I bought three harmonizer pedals to try some stuff out. Long story short, we went back on the decision."

According to Faulkner, PRIEST probably would have been able to pull off most of its material with only one guitarist.

"The set we've got at the moment, apart from the rhythm guitar underneath the solos, there's not a lot of harmony stuff going on," he explained. "'Victim Of Changes'… I've been playing THIN LIZZY in cover bands all my life with one guitar. You work out both parts anyway."

On January 10, JUDAS PRIEST revealed that it would perform as a four-piece when it returns to the road in early March. A few hours later, the band's touring guitarist Andy Sneap, who co-produced the group's 2018 album "Firepower", released a statement to BLABBERMOUTH.NET in which he said that he was "incredibly disappointed" by PRIEST's decision to carry on as a quartet and thanked the Halford-fronted outfit for the "mind-blowing" opportunity to share the stage with one of his favorite bands. Meanwhile, PRIEST fans were understandably upset about the band's decision to forgo its classic twin-guitar attack sound and made their feelings known on social media. Some even called for the return of guitarist K.K. Downing, who joined PRIEST in 1970 and remained in the group until 2011.

On January 15, JUDAS PRIEST released a statement announcing that it was reversing its decision to tour as a four-piece, explaining that the bandmembers "decided unanimously" to continue their live shows "unchanged" with Rob, Faulkner, Ian Hill (bass),Scott Travis (drums) and Andy.

"I understand what the fans were saying," Richie told "In The Trenches With Ryan Roxie". "I think we all understood what the fans were saying in the end. It's not PRIEST — that's the bottom line. I think if we did a new album, if Glenn, for whatever reason, couldn't play on it, or if we did it for one guitar, and then we toured the album that was one guitar, it would be a different thing… I think everyone saw that we listened and we saw the reaction and we discussed it within ourselves. And I think Rob's come out a couple of days ago and he said that it was his idea and it blew up in his face."

Earlier in the month, Halford told Billboard about PRIEST's short-lived plan to embark on its 50th-anniversary tour as a quartet: "That all came from me, it didn't come from the band. Of course, that blew up in my face, didn't it? To have done something like a four-piece now would've been just not right, ridiculous, insane, crazy, off my rocker, have a cup of tea and relax. It's kind of water under the bridge now. I think my heart was in the right place, but I'm not the first musician to have a crazy idea."

Sneap, who is also known for his work in NWOBHM revivalists HELL and cult thrash outfit SABBAT, began touring with PRIEST four years ago after Tipton — who was diagnosed with Parkinson's disease eight years ago after being stricken by the condition at least half a decade earlier — announced in early 2018 he was going to sit out touring activities in support of "Firepower".

Hill is the sole remaining original member of PRIEST, which formed in 1969. Halford joined the group in 1973 and Tipton signed on in 1974. Rob left PRIEST in the early 1990s to form his own band, then came back to PRIEST in 2003. Downing parted ways with the band more than a decade ago and was replaced by Faulkner.

Last month, Downing said in an interview that it was "very, very strange" for PRIEST "to even think about" the possibility of going out as a quartet. "I'm like everybody else. I'm totally bemused," he told the "Rock Of Nations With Dave Kinchen" classic rock show. It was just so extreme and insulting in a way, I guess, and insulting to Glenn as well. It was kind of a slap in the face, saying, 'Okay, you two guys did it, but we think just one guy could do what…' It kind of made us and everything that we've done and created, saying it was all superfluous, really, and didn't really have the value that… I'm sure Glenn will agree with me that it does have a value."