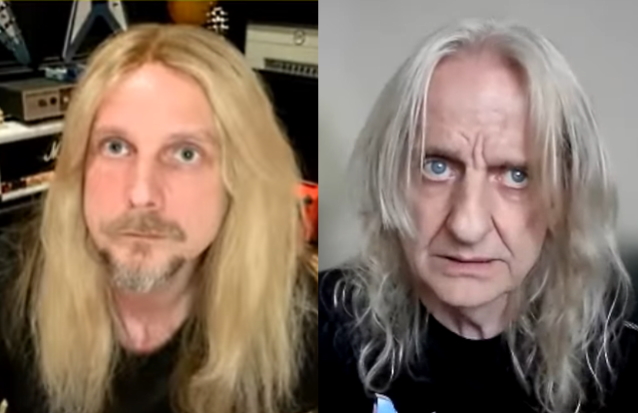 RICHIE FAULKNER Says Situation Between K.K. DOWNING And JUDAS PRIEST Has Been 'A Bit Of A S**t Show'

During an appearance on the "In The Trenches With Ryan Roxie" video podcast, JUDAS PRIEST guitarist Richie Faulkner was asked if he has had any interactions with the man he replaced in the band, original PRIEST guitarist Kenneth "K.K." Downing. He responded (as transcribed by BLABBERMOUTH.NET): "The ones [I have had] with him — I say directly, through Twitter or whatever — have been positive. I mean, there was one… He said something about my payment structure, which was [laughs]… which was weird for someone to say. And it wasn't true, which was a bit mindblowing."

Faulkner also commented on the fact that Downing has been vocal about his dissatisfaction over the fact that he wasn't invited to rejoin PRIEST when Glenn Tipton announced his retirement from the road nearly four years ago.

"That whole situation with him and the band over the last 10 years, to me, has been totally unnecessary; it's been a bit of a shit show," Richie said. "And I don't know why that is. To me, music aside, they should maybe pick up the phone and just talk to each other as buddies and go and have a beer and just be pals. You know, fuck music for a minute; let's just be pals. And then whatever happens, happens. They were pals for 40 years. They lived pretty much together for 40 years — four decades."

He continued: "I wish it was different. All that weirdness of the last 10 years didn't need to happen. If they'd parted on good terms, maybe things would be different now. But, unfortunately, that didn't happen."

Richie went on to express his hope that Downing and his former bandmates in PRIEST will find a way to mend their relationship if they eventually get inducted into the Rock And Roll Hall Of Fame.

In May 2019, BLABBERMOUTH.NET published an interview Downing gave to Germany's Bleeding4metal.de in which K.K. said that it "seems wrong" that Faulkner and drummer Scott Travis "are not officially members of JUDAS PRIEST as they are on a wage." Within a couple of days, Faulkner released a statement disputing Downing's comments, insisting that he hadn't been a salaried employee "since 2012" and slamming his predecessor's remarks as "an attempt to devalue my and Scott's position in the band."

In a 2011 interview with the Finnish newspaper Ilta-Sanomat, PRIEST singer Rob Halford stated about Faulkner's physical resemblance to a younger Downing: "People are saying, 'It's a clone. You've got some of K.K.'s DNA.' It's just the way it turned out. We made, like, a secret search. When we knew K.K. was not gonna be making the tour, we did a lot of secret, kind of, searching for another player. And Richie just happened to be the guy. And he just happens to look a little bit of the K.K. image, you know?! I think it would be silly to say, 'We looked for a guitar player that looks like Ken.' What we want is a very good metal guitar player, and that's what Richie Faulkner is."