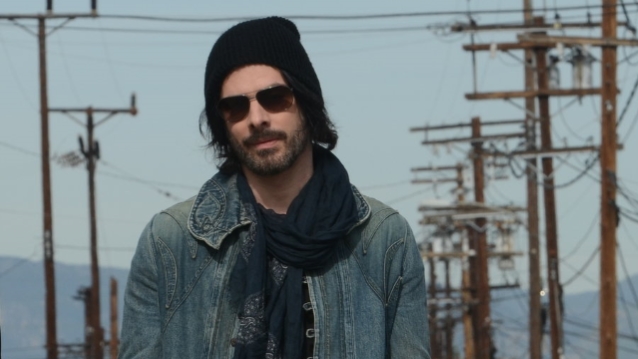 Richie Kotzen (THE WINERY DOGS, POISON, MR. BIG) is currently recording a new 50-song solo album that will be released on February 3, the guitarist's 50th birthday.

Kotzen first teased the release in an August 25 video he posted to Instagram. "I haven't been posting much because I've been busy in the studio working on what will be a new Richie Kotzen album, with new songs that you've never heard before," he said. "I'm going to do something kind of interesting on this record that I'm hopefully going to accomplish. I'm going to release it on my 50th birthday, but there's a catch. There's something that is going to be interesting tied to the record, and no one knows what it is."

Two weeks later, a subsequent Instagram post revealed additional information. "Troubleshooting a small bug in the control room today," Kotzen wrote. "38 songs recorded and mixed... only 12 remain." He included the hashtag "50For50," which was also featured in a subsequent post the following day that displayed a screenshot of the 38-song work-in-progress, which had a running time of two hours and 37 minutes.

Some of Kotzen's tentative new song titles include "Stick The Knife", "When God Made You", "Turning The Table", "Nickel Hustler", "Devil's Hand", "Confession", "Dirty Tricks" and "Mountains".

On September 22, Kotzen posted an update in which he revealed that another five songs had been completed. "Quite excited about that along with knowing I’ve now got 43 out of 50 songs ready for mastering!" he wrote.

Although Kotzen gained international recognition via his work on POISON's 1993 album "Native Tongue", through his three-year stint in MR. BIG (with whom he recorded two albums, 1999's "Get Over It" and 2001's "Actual Size") and as the frontman and lead guitarist of THE WINERY DOGS (a group that also features his former MR. BIG bandmate Billy Sheehan and ex-DREAM THEATER drummer Mike Portnoy),he is also a prolific solo artist who to date has released 20 studio albums.

He has also recorded two collaborative albums with fellow Shrapnel Records alumnus Greg Howe and one with the jazz/fusion group VERTÙ, which also featured the rhythm section of RETURN TO FOREVER, bassist Stanley Clarke and drummer Lenny White.

A little football morning noodling before I watch The Eagles! Actually this is a new off the rack RK model @fender tele I’ve been using recently. I loaded in some new @dimarzioinc pickups which will likely become RK signature model pickups for the next run of Teles. Quite excited about that along with knowing I’ve now got 43 out of fifty songs ready for mastering! #50For50 #newmusic