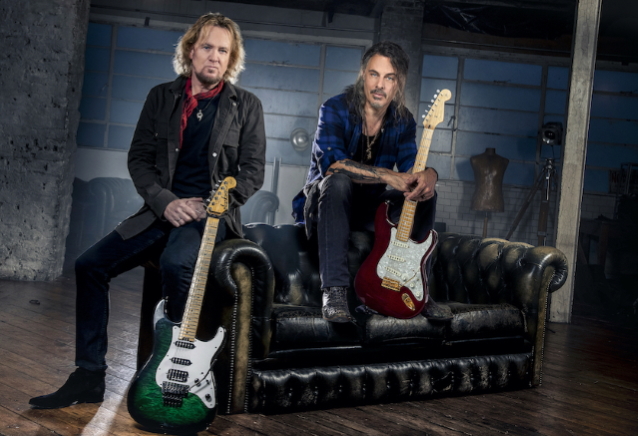 RICHIE KOTZEN On His Collaboration With ADRIAN SMITH: 'It Was All About The Song'

SMITH/KOTZEN, the collaboration between guitarists and vocalists Adrian Smith (IRON MAIDEN) and Richie Kotzen (THE WINERY DOGS),will release its self-titled debut album on March 26 via BMG.

Recorded on the Turks & Caicos Islands in February 2020, produced by Richie and Adrian and mixed by Kevin "Caveman" Shirley, this nine-track opus is a consummate collaboration between these two highly respected musicians who co-wrote all the songs and also share lead vocals and trade off on guitar and bass duties throughout the record.

Exploding with powerful melodies and harmonies, the album embodies the spirited attitude of 1970s classic rock with a melting-pot of influences ranging from blues, hard rock, traditional R&B and more, blending the pair's backgrounds and life experiences to result in a thoroughly contemporary sound.

Speaking to Australia's Subculture Entertainment, Kotzen stated about the songwriting process for the LP (hear audio below): "Both of us come from a point of, 'The song is the most important thing'… So, in other words, different guys have different ideas on how to approach things, but for us, it was all about the song, 'cause without a song, you've got nothing to play. So that was our focus. And that kind of went through every thread of what we were doing. We never got into a thing of worrying about who's gonna play what, or that sort of thing, unless there was a reason for it, as far as, 'Hey, we've got a song that exists. Now let's figure out what we're gonna do with it.' But oftentimes, it would just be dictated by casually saying, 'Hey, I've got an idea. Let me try something.' Or, 'Hey, I've got this idea for a melody for a verse. What do you think?' And then I can remember Adrian wrote a verse for one of the songs, and that led me to an idea for a pre-chorus, playing off of his words. So then I would go with that, and then we'd maybe get stuck somewhere in the middle of the chorus and then throw ideas back and forth and work our way out. So it was almost like a tennis match, like a volley — back and forth, back and forth."

The record features special guest performances by Adrian's IRON MAIDEN bandmate Nicko McBrain on drums for the track "Solar Fire", and Richie's longstanding friend and touring partner Tal Bergman on drums for "You Don't Know Me", "I Wanna Stay" and "'Til Tomorrow", with Richie picking up the sticks on the other five songs.