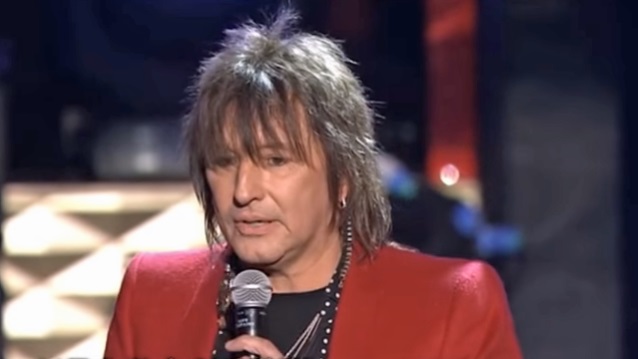 Richie Sambora has told The Pulse Of Radio that he wasn't sweating BON JOVI getting the nod for the 2018 Rock And Roll Hall Of Fame class. The guitarist said that BON JOVI being passed by every year for induction since 2008 was par for the course — and almost expected. Asked if he was anxious about whether this would finally be BON JOVI's moment, Richie said: "Y'know, I gotta be honest with you — not really. I wasn't fixated on it or anything like that. Y'know, we were never a critics band, or any of that kinda stuff, so what we did was more about the fans — and the fans really came to the polls, y'know? [Laughs] They voted like crazy, and that's a testimony, I think, of the songs."

Sambora, who joined BON JOVI in 1983 and co-wrote most of the group's iconic hits over the following three decades, hasn't played with the band since he left the "Because We Can" tour in 2013.

Sambora told Billboard last week that BON JOVI's Rock Hall induction will be a "joyous" occasion which will see him reunited with his former bandmates for the show. "I was there for 31 years and we sold 150 million records or something and we put a lot of asses in seats in stadiums around the world and made a lot of people happy," he said. "I did so many different jobs in that band, so, yeah, I'm showing up for that. Everybody should have a smile on their face and a smile in their hearts and it should be a celebration of what we did."

The event will take place at Cleveland's Public Auditorium with an edited version of the events airing at a later date on HBO.