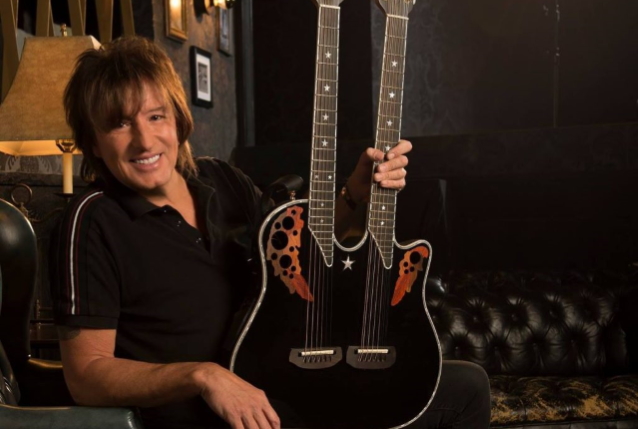 Investment company Hipgnosis Songs Fund Limited has announced that the acquisition of the music catalog of Songwriters Hall Of Fame and Rock And Roll Hall Of Fame inductee Richie Sambora. Richie is a legendary guitarist, singer, songwriter and producer, most notably known as the lead guitarist and co-writer of the American rock band BON JOVI.

Sambora, with BON JOVI, released 12 studio albums, five compilations and two live albums, selling more than 130 million records worldwide, making them one of the bestselling bands of all time. Sambora has co-written four U.S. No. 1 Pop singles and one Country No. 1. In total, he has had six U.S. Top 5 songs and 10 U.S. Top 10 songs as well as 5 U.K. Top 5 songs and 18 U.K. Top 10 songs.

BON JOVI is arguably the most successful rock band in the world of the last 35 years, rising to international stardom with its 1986 album "Slippery When Wet", which sold over 28 million copies going on to be certified 12 times platinum in the U.S. and included the No. 1 singles "You Give Love A Bad Name" and the triple-platinum-certified "Livin' On A Prayer".

BON JOVI remains one of the most listened-to bands of its time, with both "Slippery When Wet" and "Livin' On A Prayer" ranking in the Top 10 most streamed albums and songs, respectively, of the last 35 years.

In addition to his hit songs for BON JOVI, Sambora released three solo albums which have sold more than two million copies worldwide; penned No. 1 country songs for Jennifer Nettles and Leann Rimes; and co-wrote Cher's 1987 platinum-certified comeback album "Cher" as well as its 1989 follow-up "Heart Of Stone" which has sold more than four million copies.

Sambora and Jon Bon Jovi were inducted into the Songwriters Hall Of Fame in 2009 and the Rock And Roll Hall Of Fame in 2018. The band received the Award Of Merit at the American Music Awards in 2004 and has been nominated for more than 50 awards all over the world, including 10 Grammy Awards.

Hipgnosis has acquired 100 percent of Sambora's publishing and writer's share royalties in his catalog, which comprises 186 songs.

Sambora was represented in the sale by his longtime lawyer Michael Guido at Carroll, Guido & Groffman Cohen Bar & Karalian, LLP.

Merck Mercuriadis, founder of The Family (Music) Limited and Hipgnosis Songs Fund Limited, said: "In uncertain times such as this, you are reminded of the power of great songs and great music, and amongst the greatest set of songs of the last 35 years are the incomparable songs Richie Sambora co-wrote for BON JOVI and other great artists. He's a musician's musician and a songwriter's songwriter and is one of the very precious few that is an inductee of both the Songwriters Hall Of Fame and the Rock And Roll Hall Of Fame. I am delighted to welcome Richie to the Hipgnosis family and look forward to working closely with him for many years to come on this elite set of songs."

Sambora said: "I'm very privileged to have had the incredible success I have achieved as a songwriter and artist to date. These songs are very important to me and I feel very strongly that Merck is the only person I could have entrusted my babies to. I believe the work he is doing that has transformed the way that the world looks at the power of great songs and the songwriting community is very special. I look forward to working with him and his Hipgnosis team to deliver more success for all of us."

Photo courtesy of The Outside Organisation