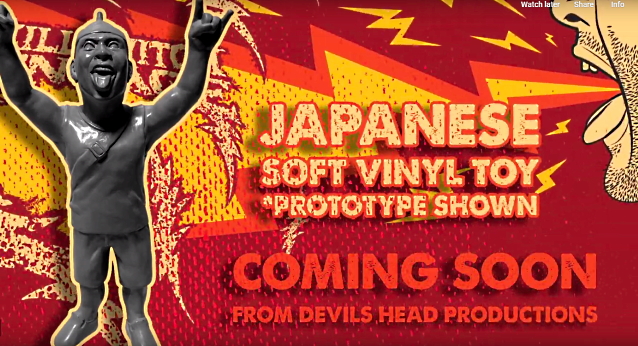 Devils Head Productions, which specializes in toys, art and punk rock, metal, hardcore culture, has announced the upcoming release of a Japanese-style hero toy modeled after KILLSWITCH ENGAGE guitarist Adam Dutkiewicz, a.k.a. Adam D. Due later in the year, the toy will be known as 酔 獣, which means "drunk beast" in Japanese.

Devils Head Productions has released the following description of the Adam D toy: "Rooted in the history and tradition of Japanese superheroes like Ultraman and Kamen Rider, 酔 獣 will soon take flight. This summer/fall, armed with the power of positivity, the drunk animal (or beer monster) will be unleashed on the world to take down anyone and everyone with a negative attitude.

"Look for 酔 獣 to make his debut in the later half of 2020. These toys will be made in Japan using the same soft vinyl production process as all of our other sofubi toys. Godzilla (or Gojira as they say in the native tongue) had nothing on Adam D."

KILLSWITCH ENGAGE's latest album, "Atonement", was released last August via Metal Blade Records in the U.S. and Sony Music Entertainment in the rest of the world. The disc features guest appearances by the band's former lead singer Howard Jones and TESTAMENT frontman Chuck Billy. It marks the band's third full-length release since the return of frontman Jesse Leach, who rejoined the group in 2012.