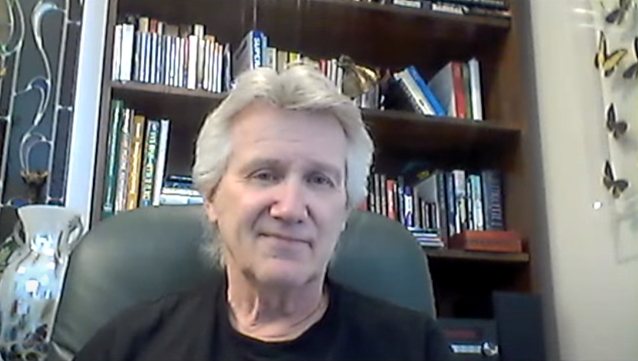 TRIUMPH guitarist/vocalist Rik Emmett spoke to Dr. Music about his upcoming memoir and how it will compare to the band's documentary, "Triumph: Rock & Roll Machine", which recently premiered at the Toronto International Film Festival. Rik said (as transcribed by BLABBERMOUTH.NET): "People are gonna get the memoir. Is it gonna be warm and happy and fuzzy? Ehhh… I think they're gonna get real Rik Emmett, so they're gonna get some truth that might hurt, or that they might go, 'Ooooh, shit. I didn't realize that he was like that. I didn't realize Rik was that kind of guy.' But I'm not afraid anymore to speak truth. What am I saving it for? [Laughs]"

He continued: "I was doing an interview the other day talking about the documentary. And the guy was saying, 'Oh, so we're gonna get a true insight.' And I go, well, let me make sure that you understand this. You're gonna get a documentary made by Banger Films, and that's essentially Sam Dunn and Marc Ricciardelli. And those two guys, they know what they're doing — they've done plenty of these: RUSH and IRON MAIDEN and ZZ TOP and Alice Cooper, and you name 'em. But they're gonna tell a story. They know that, as a filmmaker, that's what they need to do — you need to sort of tie everything to a story. So the story of TRIUMPH is gonna be the story that they decide to tell. And it's gonna be based on whatever footage they have available and whatever they decide [the angle should be]: 'Ooh, Rik quit the band at its height,' and, 'The band disappeared overnight.' And I go, 'Well, that's not what it felt like to me. That's not my story.' And when my memoir comes out, there'll be an opportunity for me to tell more of my story as opposed to the one that's the TRIUMPH story that Banger Films is telling you in a rockumentary. Which is not to say that [the documentary is] not great — it is great — but it's their story. And my story isn't [drummer] Gil Moore's story, and my story isn't [bassist] Mike Levine's story, although there was a story that was the three of us."

Produced by the aforementioned Banger Films, "Triumph: Rock & Roll Machine" is a Crave original documentary that was previously described as "a celebratory, exhilarating thrill ride through the history of one of rock's most unsung acts." The film covers TRIUMPH's humble beginnings as staples of the GTA circuit in the mid-'70s to their heyday as touring juggernauts, selling out arenas and stadiums all across North America with their legendary spectacular live shows — and way beyond.

Last year, Emmett told The Metal Voice about the making of "Triumph: Rock & Roll Machine": "There's a surreal nature to it — you're going back in your life, and they're reminding you of things that you'd completely forgotten," he continued. "And you're going, 'Oh, yeah.' And then they're digging deeper, and they're going, 'So, when the band broke up…' And you're going, 'Okay, this hurts, actually.' I don't wanna have to go back to that, because the rise and the fall and the rise again, it's the fall that hurts. I don't wanna go there. I thought I'd put all this behind me. It was ugly, heavy baggage."

The aforementioned invite-only event was held in November 2019 in front of 300 "superfans" at MetalWorks studio in Mississauga (a suburb of Toronto),Ontario, Canada. Emmett, Levine and Moore played a three-song set that marked TRIUMPH's first performance in 11 years, as well as its first as a pure three-piece power trio in 31 years. The tracks played were "When The Lights Go Down", "Lay It On The Line" and "Magic Power".