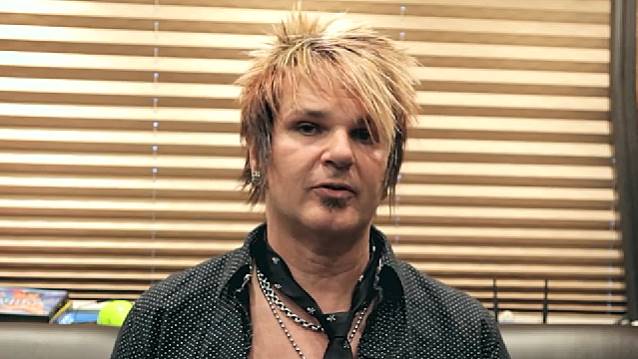 Episode 246 of the "Iron City Rocks" podcast (web site) features an interview with POISON and DEVIL CITY ANGELS drummer Rikki Rockett. You can now listen to the chat using the audio player below. A couple of excerpts follow (transcribed by BLABBERMOUTH.NET).

On whether there are any plans for POISON to play live in 2015:

Rikki Rockett: "Well, yeah, there is. And it could get very complicated with two bands for me. But, you know, POISON has been doing, like, the last two years, we've just been doing, like, these, sort of, corporate gigs for different companies, which are fun, and they pay very well. It gives us a chance to all get together and play. And, in fact, we have one in October and we have one in January [2015]. But they are the only shows that POISON is doing this year; we are not doing a tour this year. There is a few things that are being thrown around right now by our management for next spring, and we'll just have to see. The thing is, POISON is my priority, and it's my baby and it's my first love, but this band [DEVIL CITY ANGELS] is something that I'd really love to stand behind. And this isn't a project, and that's what I want everybody to know. We plan on doing this for awhile. So we're real happy with it right now."

On continuing to have a career as a rock musician despite the downturn in the economic fortunes of the record industry:

Rikki Rockett: "I feel very blessed to be an older rock guy — I'm not a kid anymore, although I probably process things like a kid, mentally — but to be able to get out there and play and make a living at this, I just consider it to be just such an awesome thing. There's so many of my peers that have not been able to do that, and they're doing something else in life, which is not the end of the world, obviously. I have two kids, and they are the world to me, and that's the stuff that's important, really, at the end of the day. But you wanna support them, and you want them to be proud and excited about what you do."

Email newsletters for bands at ReverbNation.com
Find more on