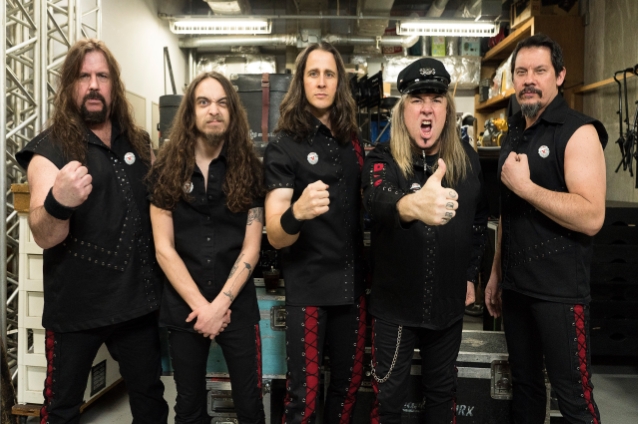 The official lyric video for the song "Caught In The Witch's Eye" from RIOT V, the band featuring members of legendary metal pioneers RIOT, can be seen below. The track is taken from RIOT V's latest album, "Armor Of Light", which came out on April 27 via Nuclear Blast.

Donnie Van Stavern, a longtime collaborator with RIOT founder Mark Reale, plays bass in RIOT V and is one of its chief songwriters.

After Reale passed away in 2012, the surviving members of RIOT announced they would continue as RIOT V. They recruited singer Todd Michael Hall and released the critically acclaimed "Unleash The Fire" in 2014.

The band commented: "We offer a conceptual lyric video from our latest album 'Armor Of Light' on the great Nuclear Blast Records, 'Caught In The Witch's Eye'. Donnie Van Stavern composed the music and Todd wrote the lyrics about a witch that wants to sell your soul to the devil type of tale; she promises to take away your troubles, but you'll end up hating the price you have to pay!"

Asked in a new interview with Lords Of Metal if he was afraid the name change would cause a bit of confusion in the metal community, Van Stavern said: "Well, maybe it does a little bit, but it was a conscious choice of us to do so. We didn't have to do it as there were no legal issues whatsoever as we own the band name, but even though Mike [Flyntz, guitar] and I had been in the band longer than anybody, I felt that this was the fifth chapter of the band. Let's convey to the people that we not only trying to live on the legacy of the old RIOT, but that we are a band for the future. Chapter one was the period with Guy Speranza, chapter two was with Rhett Forrester, chapter three featured Tony Moore, chapter four were the Mike DiMeo years and now chapter five features Todd Michael Hall as the RIOT vocalist. Therefore I thought it would be cool to add the 'V' to the logo to clarify that this is the fifth chapter of the band. It's a name change, but in a way it isn't, as it just means that a new chapter in the book is written. It don't think it causes any confusion as the people know that it's still the same band and as always we still stand for great power metal music."

Van Stavern also talked about the songwriting process for "Armor Of Light", saying: "We started after we did our last tour for 'Unleash The Fire'. We first had to get some legal and personal stuff done, and once we got that out of the way, we started writing for the new record. I myself am always writing music, however, and I had already many song ideas available. About six months after the tour, we really started the writing process for 'Armor Of Light' and exchanging the ideas that we had. We knew that we needed a record that would appeal to the older RIOT fans as well as the new fans that we're trying to acquire. Even though it's an older band with a lot of history, we wanted to make a fresh record. I wrote songs in the style that I'm known for which is reminiscent to the 'Thundersteel' style, while Mike channeled his gears in the DiMeo years, which is a little bit more in the DEEP PURPLE vein. We had that conscious effort going to combine our best songs and we had a lot to choose from. We picked the tunes that we felt that everybody would like and which would appeal to the RIOT fans. We wanted to deliver a very aggressive record, but melodic at the same time." 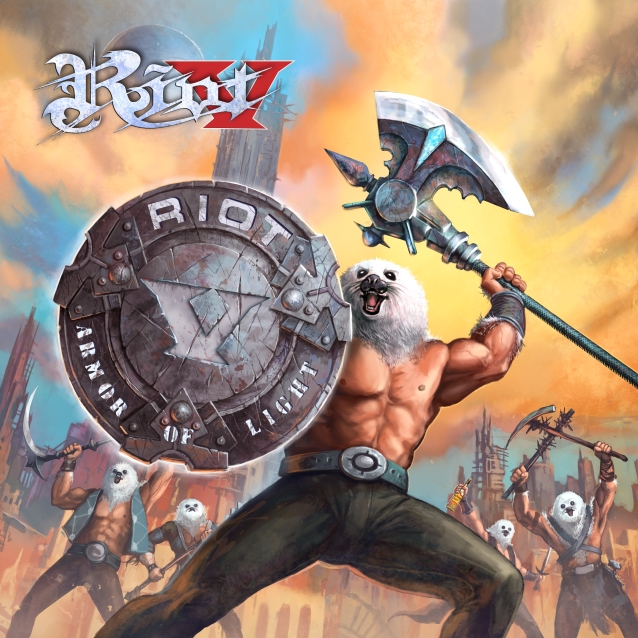