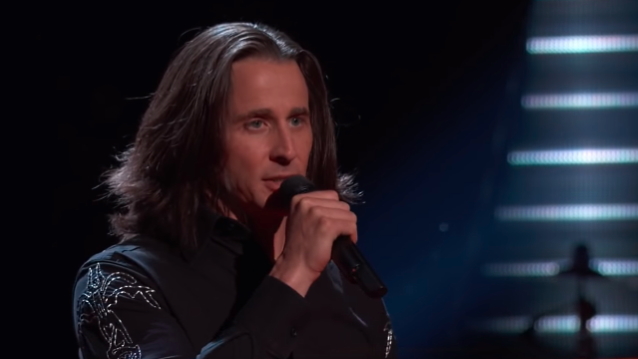 RIOT V singer Todd Michael Hall impresed the coaches on NBC's "The Voice" this week with his performance of the classic FOREIGNER song "Juke Box Hero".

The 50-year-old, who lives in Saginaw, Michigan, took the stage during blind auditions this week and surprised the coaches with his range.

Coach Kelly Clarkson, first season winner of "American Idol", called Hall "incredible," saying, "My mind was blown the entire time. We usually tell people, 'You've gotta give us your all, 'cause we're turned around.' You did it."

Fellow coach Blake Shelton also praised Hall's performance, saying Todd's voice reminded him of "the hair bands" of the 1980s. He added that Todd has "a direct path to the finale."

"I was thinking you had reached the peak of your range and then you would just push it one step further," said coach Nick Jonas.

"Not only were you hitting those high notes out of the stratosphere, but I thought your low tone was beautiful as well," said John Legend. "It was magical. So impressive."

Hall is best known as the lead singer of RIOT V, which features members of legendary metal pioneers RIOT. Hall has also sung in many other metal bands, including REVERENCE, ENTICE, JACK STARR'S BURNING STARR and HARLET.

Hall, who is the owner of a climbing gym and the father of three kids, signed on with Shelton as his coach at the end of the round.

National TV last night. Back in the office this morning. I am overwhelmed by the love and encouragement. Congratulations to my fellow contestants. You were awesome! #blessed#sograteful#thevoice#teamblake@ToddMichaelHall@blakeshelton@NBCTheVoicepic.twitter.com/cLYoTcGVd0