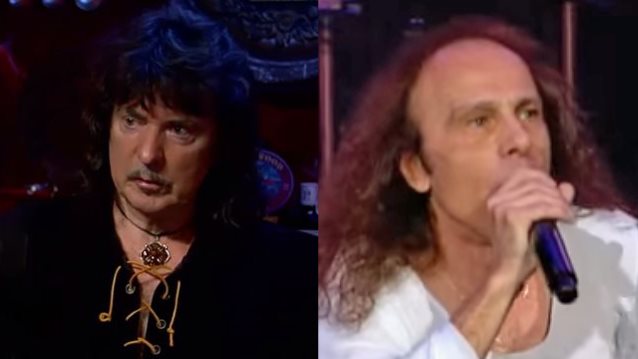 In a brand new interview with Newsweek, legendary guitarist Ritchie Blackmore was asked if he was disapppointed that he wasn't able to invite original RAINBOW singer Ronnie James Dio, who died in 2010, to take part in the band's reunion shows last year. He responded: "I hate to say it, but no, I wasn't. I'd finished with Ronnie a long time ago, and we kept in touch now and again, but I went on to other things, and he was in other things. We kept it very convivial and that, but I think neither one of us really wanted to get back together. He's a strong alpha male, and so am I; he wanted to go one way, I wanted to go the other."

In a 2009 interview with Greece's Rock Overdose, Ronnie was asked if he would be open to making a RAINBOW reunion album with Ritchie. Dio responded: "No, I will never do another RAINBOW album. I'll never ever do that again. I want no part in doing it; I want no part in doing anything with Ritchie at all. I respect him. He's a genius. He was a great part of my life, but I don't need to go through that hell. Especially when you get to be this age, do I need to suffer more? I think life should be easier as you get older and not more difficult. And Ritchie is too difficult a person for me to deal with, because I like to have control of my own life.

"When I'm not in [HEAVEN & HELL], I'm in the DIO band. We think the same. So, there is no problem with not liking each other or demanding that I have to do something that I don't want to do. So, it's not a place I want to go to.

"I'm happy for Ritchie that he's happy doing what he's doing. I wish he were not doing it and I wish he was still making rock 'n' roll music. But maybe he's too old… He's pretty close [to my age] too."

He added: "I'm not trying to make Ritchie out as a bad person, because he's not a bad person — he's a good person — and, as I said before, he's a genius, but he's making life difficult for people. He's not a kind man at times, and I don't wanna be around cruel people. I had enough of that from him…

"I had no problem with Ritchie. Ritchie and I never argued. We never had a problem. I think I was always able to write the things that he wanted — until he decided he wanted to be a pop star. And then he started doing pop music. And once he did that, that was the end for me. I didn't want to do that.

"I was lucky enough to be able to get into [BLACK] SABBATH and write things that were… perfect for me. I wanted to be heavier than what he allowed me to be… or allowed his band to be."