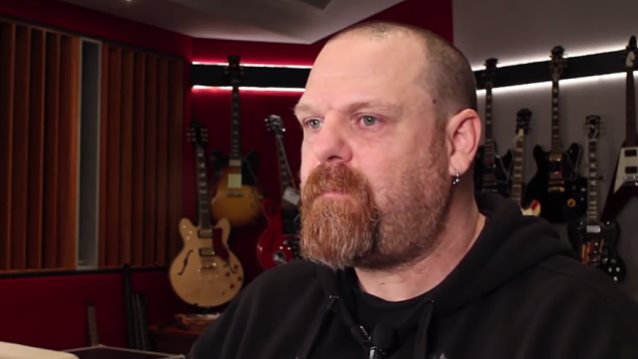 Former EXODUS and current GENERATION KILL frontman Rob Dukes was interviewed on the latest installment of Australia's "Blood, Sweat And Metal" podcast. You can now listen to the chat using the widget below. A few excerpts follow (transcribed by BLABBERMOUTH.NET).

On whether he has spoken to returning EXODUS singer Steve "Zetro" Souza or any other members of EXODUS since his departure from the band:

On how he looks back on his time with EXODUS:

Dukes: "I've never met, really, any people that… I've never had anybody walk up to me and go, 'You suck!' or 'You're a piece of shit!' I've had people say it on the Internet, but I've never had anybody say it to my face. For the most part, man, it was a dream come true. I mean, how many people get to say they've done what I got to do? I was just a regular dude, working a job, and I got the opportunity and I took it, and I turned it into something that lasted nine years, and I'm completely grateful for the experience. I'm not happy with what their decision is, I think it was… I'm just not happy about it, but there's nothing I can do. It's their decision, you know, it was their band, and I was just the new guy who came along and filled in. So if that's the route they wanna go, whatever. I'm gonna continue with GENERATION KILL. We're making a new album right now. And we're gonna go out and tour. So GENERATION KILL is kind of like a cool little entity that I started with friends that I've known since high school. And that's really the plan."

On the EXODUS album he was working on at the time of his dismissal from the band:

Dukes: "How do I say this eloquently? The new material was kind of more of a throwback, it had a little bit of a punk-rock tinge. It had just more of a throwback to the 'Fabulous Disaster' [1989] kind of era of EXODUS, and I went with it. You know what I mean?! That's really all I've got to say. I've got nothing bad to say. I don't want it to come across wrong. Like I said, they have their own plan. I don't know what it is. I'm not involved in it anymore. They're moving on without me and I'm moving on without them. Like I said, I'm gonna go take GENERATION KILL and I'm gonna try to tour and make some more records and play music for a living, if I can. But right now I'm building a race car for the Baja 1000, and that's kind of where I'm concentrating my life right now. I've moved to the desert in Phoenix, Arizona, left New York, and now I live out in the desert, and I'm gonna start building a car and testing out here, so I can try to race in November in the Baja."

On how the conditions for professional musicians have changed over the nine years that he was in EXODUS:

Dukes: "Well, downloading really changed everything. I mean, the Internet really changed… There's a positive side to it, as far as your accessibility to the entire world and everyone. You have all the social media that you can use for free to try to promote your band and get your music out there. And on the downside of it is the fact that you can't make money from your albums anymore. So, basically, when you make an album, you pretty much give it away, because the first day it comes out, it's free to the world. There's a very small group of people that actually buy the physical copies anymore. So you have the cool people that are really good at going on iTunes and buying your album and supporting the band, but you don't make any money from that. You really only make money when you can sell merchandise on tour. Because the smaller bands, really… What it costs to tour… Just say, for instance, you get $1000 a night and your production costs are $1000 a day. Pretty much you break even on your production costs and really you can only sell merchandise to make your profit so you can have a paycheck when you get home. So you can go on tour for six weeks, break completely even and only come home with the money that you've made from selling t-shirts. So, honestly, you can buy t-shirts for $5 apiece, sell them for $15 and you're making a $10 profit on each shirt. But, that being said, you still have to cough up $10,000 to print the shirts in the first place, pay that in advance, and your tour bus you have to pay for. So it's a huge cost, and sometimes you lose money, sometimes you make a little bit, but unless you're an established, successful band, you're not gonna really see much profit. You're gonna kind of break even and make an honest but minimal living. So there's a lot of sacrifice and a lot of heartbreak that comes along with being a musician. But I was never in it for the money — I never did this for the money — I did it for the music and the songs, and I did it for the fun of being on the road. Of course, I wanna at least pay my rent; that would be nice. So I had to make a little money going on the road. I try to keep my living costs kind of minimal, you know what I mean?! I own my car, I don't have a car payment, I own my motorcycle, so I don't have any motorcycle payments, but I have to pay insurance and I have to pay rent and electric and cable, and things that life is. So when you go on tour for six weeks and you don't make any money, that puts you in a hole. So you come home and work overtime. It's hard to even keep a job that will allow you to say, 'Hey, man, I'll be back in six weeks.' I mean, it's really difficult. So there's a lot of downsides in being a musician. And the upsides are, man, you get to play music in front of people and they really dig it, and people buy your album and they listen to it at home and they fucking write you an e-mail, saying, 'Dude, you're awesome, and your music is great. Thank you.' Sometimes that's enough; that's enough to put up with no money and late rents and all the other shit that comes along with life. Everybody wants to be successful — I mean, that's kind of what we're all trying to do — and I'm not pretty enough to be in a boy band, so I'm stuck doing metal."

EXODUS guitarist and main songwriter Gary Holt said that the decision to fire Rob and re-hire Zetro "was the most difficult decision of our lives, one the entire band made." He added: "I have had the honor of watching Rob go from unknown guitar tech to awesome singer and frontman and could not be prouder, and his future is bright as fuck, that's for sure. It doesn't end here. The world will see plenty more from Rob, this much I will bank on… Rob's contributions are some of the best stuff this band has ever did, a big part of this band's return, and we are grateful."