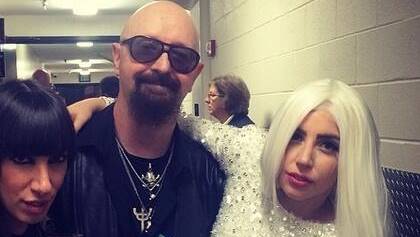 "I've been a huge fan of Gaga since she first burst on the scene," Halford said. "I just love everything that lady represents. First and foremost, her voice is extraordinary. I love her voice. She's an accomplished musician, she plays piano really well, she's just a great songwriter. And she's a beacon of hope for a lot of people in the world."

According to Halford, he finally had the chance to meet Lady Gaga after her show in San Diego earlier this month (see photo below, as posted on JUDAS PRIEST's official Facebook page). He attended the concert with Lady Starlight, Gaga's longtime friend and collaborator who supported JUDAS PRIEST on tour in 2011. During their short meeting backstage, Halford and Lady Gaga even discussed the possibility of a collaboration in the future.

"It was a real moment come true," he said. "We didn't really have much time to talk. She's busy. I'm busy, but we've agreed to get together at some point and just hang out and maybe do something. I don't know if that will ever happen, but I love her to death."

Last month, Halford revealed to Yahoo! Music that during one of the London gigs on JUDAS PRIEST's "Epitaph" tour, Gaga was planning to appear as a special guest. "Gaga called and said, 'Can I get on the back of Rob's bike when he comes out and we'll do 'Hell Bent For Leather'?" he said. "I was like, 'Oh my God! Diva moment. Please let this happen!' But she couldn't do it. She ended up doing a shoot in Omaha, Nebraska, that took a week." He added: "If that isn't a nice affirmation that someone with extraordinary talent that isn't metal can still gravitate to the metal experience, I don't know what is."

Halford also reiterated his interest in collaborating with Gaga, saying: "I just love her. She has an open invite to anything we do. She's a total metalhead. She's really hardcore and her voice — oh my God. She has the most beautiful voice. Out of all the recent people in that genre, she is the most extraordinary, and she's carrying it all on her back. That's an incredible feat of success in today's world… Everything she does when she puts on her shows is a real work of art. She pushes boundaries and expresses a lot of love and a massive investment in everything she believes. I just think that's wonderful."